Xander Schauffele became the eighth first-time winner on the PGA Tour at the Greenbrier Classic.

The 23-year-old produced a closing round of 67 to finish one shot clear of fellow American Robert Streb.

Schauffele (-14), who finished T5 at the US Open last month, closed out in fine style with two birdies in his final three holes to pile the pressure on the chasing pack. 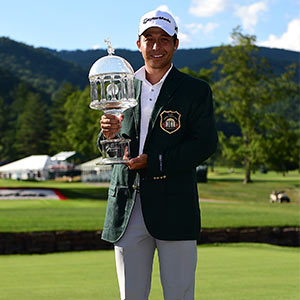 A moment of magic at the par-3 72nd hole left the youngster a tap-in for two meaning Streb had to birdie one of his final two holes to force a play-off.

After burning the edge of the hole on 17, Streb missed the green left on the last leaving a twenty foot chip to tie. The 30-year-old left his effort agonisingly short and handed his counterpart a first PGA Tour victory and a ticket to Royal Birkdale.

With victory Schauffele became the eighth first-time winner on Tour this season and the fifth rookie to do so.

Streb (68) also punched his ticket to the Open on Sunday alongside Jamie Lovemark (69) and Sebastian Munoz (72) who finished T3 at 12-under.

Elsewhere, 2016 Team USA Ryder Cup captain Davis Love III saw his bid to become the oldest winner in Tour history faulter as he dropped back to 5-under for the tournament with a final round 75 to finish T29.