Justin Thomas ended a sensational season by becoming the FedEx Cup champion at East Lake as Xander Schauffele pipped him for the Tour Championship.

Xander Schauffele wasn’t even eligible for Augusta, he then became just one of 15 players to reach double (red) figures at the US Open and then captured the Greenbrier Classic.

Here at East Lake he captured the Tour Championship, making a birdie at the last – his two-foot putt horseshoed its way in – to pip Justin Thomas, though his disappointment won’t have lasted too long as he collected the $10 million cheque for becoming the FedEx Cup champion.

As for Schauffele he also sealed, in some style, the Rookie of the Year award. The 23-year-old was only at East Lake due to his remarkable finish last week at the BMW Championship – he played the last six holes in six under par, five under wouldn’t have been enough. He is the first rookie to win the Tour Championship.

Thomas ends the season with five wins, including the PGA Championship, and he closed with a 66 after making birdies at 16 and 17 before just coming up shy at the last.

Russell Henley shot the best round of the day, a closing birdie going alongside four on the front nine to sign for a 65. 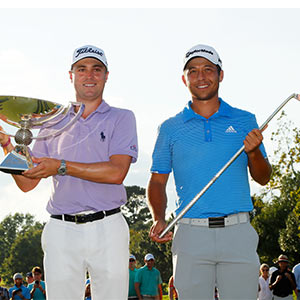 Jordan Spieth, who began the week in pole position for the huge pay out, looked like making a late run for it when he holed out at the 10th and then stuffed another one in to kick-in range at the 13th but his challenge then stalled. At one point there was 20 points between Spieth and Thomas as the lead chopped and changed.

As for the final pairing Paul Casey and Kevin Kisner they both put one in the water at the 15th and, though they got up and down from the drop zone for a pair of bogeys, they had too much to do over the last three holes. Kisner eventually tied for third with his countryman Henley.