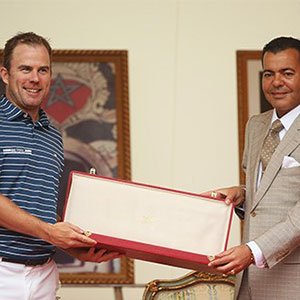 Richie Ramsay claimed that it was 'his time' after 'taking the tournament by the scruff of it's neck' with his final round 69 (-3) seeing him lift the Trophee Hassan II title by one shot.

After carding four birdies in a row from the third, a triple bogey (6) on the par-3 eighth hole was not enough to derail the Scotsman, who went on to record 10-under for the tournament.

"I just didn't execute the shot exactly how I wanted to," Ramsay said describing his poor sixth hole, "I hit a pure chip, rolled back into a divot, didn't come out, hit it back on, two putts for an easy six," said the 31-year old.

"It's one of those courses that's got so many holes like that, but I knew I was still in the mix and walking down the 9th I was like - I'm still level par - I knew the back 9 very scoreable."

"I made great putts on 9 and 10 just to keep the momentum going. From then on when I stood over a putt - I think it was the 12th hole - I just thought my putter felt absolutely great and I could see all the lines.

"I just thought to myself just go for it this is your time and I pretty much took it by the scruff of the neck over the next two holes.

"To execute the 7 iron on the last was one of the best shots I've ever hit, from visualisation to execution.

"It was just perfect."

This was a miraculous return to form for the Scotsman, who has already missed the cut in four of his five starts this season, and could see the Scotsman move into the top 80 of the Official World Golf Ranking.

"My brother has supported me since I was so young, this one's for him and Angela. I've gone through some tough times with injury and I kept believing," said Ramsay.

"It was so much fun out there. It was just absolutely brilliant."

A late charge from Romain Wattel was not enough to force a playoff, having missed a final hole chip that would have seen the event settled in a shootout.

The 24-year old Frenchman is still looking for his first European Tour victory.

George Coetzee, looking to gain entry to The Masters, finished in a group of six that tied for second on -8, including: Pablo Larazabal, Chris Wood, Mikael Lundberg, Kevin Phelan and Jaco van Zyl.

Spanish veteran Jose Maria Olazabal, 49, who won the Ryder Cup both as a player and captain and also won the Masters` twice, finished strongly with a blistering 66 to finish in a tie for ninth at seven under with four other players.