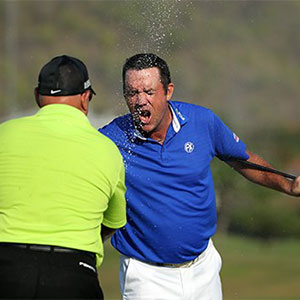 Last week Australian Scott Hend finished the week at Doral at 22 over, now he has his second win on Tour in 144 starts.

Home favourite Piya Swangarunporn, 798th in the world, put the pressure on with a course-record 63 and led by one with five holes of Hend’s final round to play. The 32-year-old holed his second shot at the 10th, holed a 40-footer for back-to-back birdies at 14 and signed off with a 20-footer.

Last year Hend lost out to Andrew Dodt by a shot after bogeying 14 and 17, this year he reversed those dropped shots with birdies. He could then afford to three putt the 72nd hole for a par, a four-under 68, and one-shot win.

Thomas Pieters, who began the week with a 73, took third to secure his place in the WGC-Match Play and Peter Uihlein got up and down at the last to take fourth.

What Hend said: "For Piya to shoot 63 was an amazing round. He set the score and the target and then I had to just try and keep making birdies to try and catch him.

"I learned from last year when I pushed too hard on the 17th here and lost my chance to win. So this year I knew I had to be patient and let the golf course come to me.