TaylorMade-adidas Golf Tour staff professional Sergio Garcia birdied six of the last 12 holes on his way to winning the Commercial Bank Qatar Masters in a 3-hole playoff to fire himself into the top 10 in the Golf World Rankings.

The popular Spaniard wore adidas Golf apparel including the new adizero one golf footwear and played a full bag of TaylorMade equipment including the SLDR Driver, of which he produced some wonderful play with.

Sergio played his SLDR driver a full degree of loft more than his previous driver to take advantage of the low-spinning performance of the golf club. Sergio ranked No. 5 in driving distance averaging 299.6 yards and was one of 29 players in the Qatar Masters field who played with the SLDR driver, which was recently declared ‘the perfect driver’ by Golf Digest magazine.

Known as one of the best golf ball strikers in the game, Sergio also hit 75% of his greens with his new Tour Preferred MC Irons. This was the second time in three events that Sergio Garcia has played and won with the Tour Preferred MC irons, which combine a player’s shape with a shallow “muscle cavity” to boost MOI, creating an unparalleled blend of beauty, feel, workability and stability.

Sergio also wore adidas Golf apparel and footwear, including the new adizero one , which launched this week on Tour. 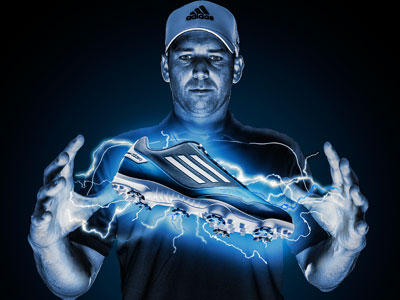 The adizero one is the lightest cleated performance golf shoe in the adidas Golf footwear range and comes in weighing less than 10 ounces! A visually appealing design that provides maximum performance features a unique centre traction cleat utilising CenTraXion™ technology for ultimate grip while maintaining stability throughout the swing. The lightweight design combined with the stability allowed Sergio to maintain his power and energy throughout, to go the distance and claim victory after three playoff holes.