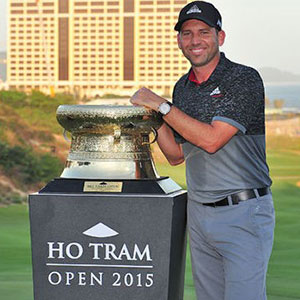 Sergio Garcia triumphed in a four-way play-off to land his first title in two years at the Ho Tram Open in Vietnam.

The Spaniard nearly blew his chances after a double-bogey on 17 saw his two-shot lead disappear.

But the 35-year-old beat India's Himmat Rai at the second extra hole after Thaworn Wiratchant and Lin Wen-tang were knocked out following the first hole.

It was his first victory since the 2014 Qatar Masters.

Garcia said: "I haven't won in a while and I was fortunate to get a second chance after I had given it away.

"After you've been up there and don't win, a lot of things go through your mind," said Garcia.

"This win will help give me a little bit more confidence."

After completing the 72 holes in 14-under, a 35-foot birdie at the first play-off hole kept Garcia in contention as Rai tapped in from five feet.

A par was good enough for Garcia at the second extra hole as Rai drove into the bushes.