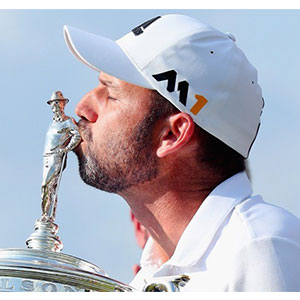 Sergio Garcia picked up his first win on the PGA Tour since 2012 after overcoming Brooks Koepka in a play-off.

The American ran up a six after driving into the water while Garcia made a rock-solid four – he now has nine wins on Tour, the same as Seve Ballesteros.

Garcia also won the 2004 Byron Nelson and is the first two-time winner since the event moved to TPC Four Seasons in 1983.

Matt Kuchar missed out on the play-off by a shot after returning a last-round 65 while Jordan Spieth, after rounds of 64, 65 and 67, had to birdie the last for a 74.

Koepka actually got to 17 under before consecutive bogeys at 14 and 15 but he still had a 16-footer for outright victory at the last. The effort just missed on the low side.

Garcia also had chances at the last two holes but he had to wait for extra holes to finally get over the line.

This was the Spaniard’s 301st start on Tour and is a huge boost for his Ryder Cup hopes.

What Garcia said: “To be able to call myself a two-time Byron Nelson champion is spectacular. I'm very happy about it.

“I didn't know (about equalling Seve’s nine PGA Tour wins). I obviously found out after winning but I didn't know and it means so much to be right next to him on that aspect.

“So, it's another achievement that I couldn't be prouder of and, you know, to be next to a legend like him, it's amazing. I kind of won it a little bit today his way.”