Jordan Spieth produced a magical moment, holing out in the play-off to win the Travelers Championship against Daniel Berger. Spieth now has 10 wins on the PGA Tour before his 24th birthday, only Tiger Woods was younger to achieve that feat.

Spieth had been particularly out of sorts in the final round, missing a variety of short putts but he was incredibly fortunate to avoid the water twice on the back nine, the second time at 15 where he made a birdie even though he thought his putt had missed. 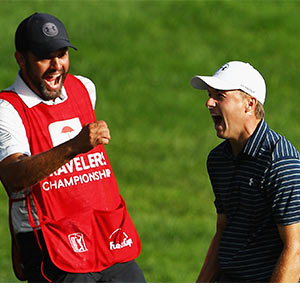 Berger joined him at the top of the leaderboard with three birdies in the last six holes but needed a sand save at the 72nd hole – as did Spieth – to finish at 12 under. In the play-off Berger went left but avoided the tree while Spieth went low and left and found the timber.

In regulation play he had a sand wedge in, this time it was a 5-iron which found the same bunker but the recovery was sublime. Berger had a 40-footer to keep it going but it slipped by and Spieth, for all the talk of being out of form, has two wins in 2017.