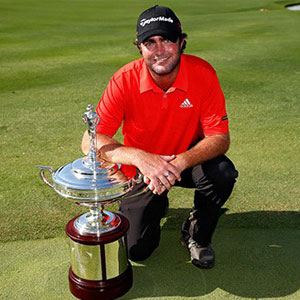 A rain affected final two rounds were not enough to stop Bowditch from controlling the closing stages with a final round five-under par 64 to win by four on -18.

Jimmy Walker was tied for second on -14 with Zach Johnson, Brandt Snedeker, Jason Dufner and Dustin Johnson all inside the top 10.

The scene was especially poignant for 31-year old Bowditch, having held his wedding at the golf course and taking wedding photos on the winning green.

"This is a very special place for me," explained Bowditch. "As you guys probably are aware, you know, Amanda and I got married here at TPC. So this is unbelievable to be sitting up here on a last Sunday afternoon talking to you guys.”

“Myself and my wife took some wedding pictures here,” said the 2014 Texas Valero Open winner. “We got married here at TPC so it’s a special place and now I get to take some more pictures.”

After his second place finish, Walker said: "It was close. I did a lot of really good stuff this week. I haven't been playing well last three, four weeks."

Masters champion Jordan Spieth – still without a win in his home state – was unable to challenge despite his late third round charge.

Spieth was only able to card a even-par final round 69 to finish tied-30th at seven-under par for the tournament.

"This is in my fifth start here, my second best finish," said the Masters champion.

"So, my best finish I was 16 so maybe I've stepped down from when I was 16 until now but pick it back up at some point. This is a special week for me and lived up to it this year. I improved from the last couple years as a professional. If can continue to do so, maybe I'll have a chance to win one of these."