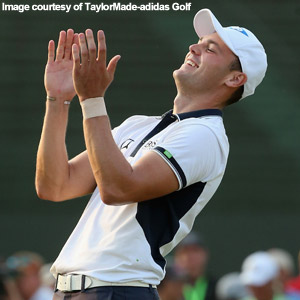 After posting the lowest-ever round in a U.S. Open at Pinehurst in Thursday’s opening round and then repeating his performance in Friday’s second round, TaylorMade-adidas Golf Tour staff professional Martin Kaymer showed strength and character in running away from the world’s best players for a wire-to-wire win at the 114th U.S. Open Championship by 8 strokes.

Kaymer has now become the first player to win The Players Championships and the U.S. Open in the same season and is projected to jump to fifth in the official standings.

Kaymer has been a TaylorMade-adidas Golf Tour Staffer since 2010 and is known for rarely making equipment changes but Kaymer put the TaylorMade SLDR Driver into play at the 2013 Open Championships and has kept it in his bag ever since. He also added the new Tour Preferred MC Irons to his bag at the WGC-Accenture Match Play Championship in February.

Whilst the course played easier on Sunday, no other competitors were able to score low enough to challenge Kaymer’s lead. Both Keegan Bradley and Jim Furyk played well and both ended up 3-under 67s but neither began close enough to Kaymer to challenge. Mickelson suffered issues on the greens and struggled with putts whilst, Rickie Fowler ran into issues with a double bogey on hole number 4 and couldn’t recover.

Playing at Pinehurst is always special for Kaymer, 29, who said “The way I played golf in the first few days was very good and fortunately I could bring it home. Overall, it was a very, very good week for me and my main goal this year was to make the Ryder Cup team. I hope it is enough.”

This is the second major title for Martin Kaymer and it was a supreme display. His final total of 271 has become the second lowest score in U.S. Open history and he is the first German to win the U.S. Open.

Inside the Winner’s Bag: Martin Kaymer