The ladies took to the stage first and records started to tumble. 14 year old Elle Gibson set the pace with a staggering 326 yard drive which was beaten by Glaswegian, Ilona Stubley, who hit a massive 338 yards – the longest ever drive by a lady in an American Golf Long Drive competition and the longest of the day.

Despite Elle and Ilona both being new to Long Drive, this talented pair would eventually go head to head in the Final. Both players had been evenly matched throughout the day so the Final was a real battle. Elle’s final set fell just shy of the 300 yard mark, but the target of 299 yards was not quite long enough as Illona kept her head and eventually clinched the title with her final drive of the day, “All day Elle was hitting great, so I knew the final would be tough. In the third set, I was pleased that I was hitting second as I prefer to chase down a score and knowing what I have to do to win. To win it with a drive of 307 yards was a great feeling as I was still able to hit a good distance when the pressure was on and made all the hard work leading up to the event worthwhile. 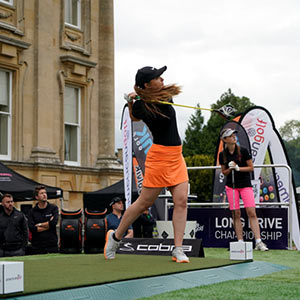 The men’s category also opened with a record breaking drive in the seeding round. Max Armstrong hit a staggering 454 yard drive – the furthest of his life and of the competition. Despite this amazing strike, the Final was between Germany’s Timo Petrasch and 2015 American Golf Long Drive Champion Dan Konyk. Timo hit some enormous drives but unfortunately couldn’t keep them in the grid, leaving the experienced Konyk to take the title with a drive of 401 yards in his final set.

Dan has found incredible form to regain his title and is looking forward to the next challenge, “To win qualification for the World Championships is a great opportunity and I can’t wait to represent American Golf at the highest level. This will be my 13th World Championships and if I can carry this form forward to the U.S. then I’ve got a real chance of bringing the title home.”

The Senior’s category also delivered the longest ever drive with William Tyrell Hunt, who came out of retirement to compete, hitting 413 yards. The Irishman was knocked out in the semi-finals by David Willmore who faced Charles Seo. It turned out to be third time lucky for the popular Londoner who has featured in all of the American Golf Long Drive events to date. 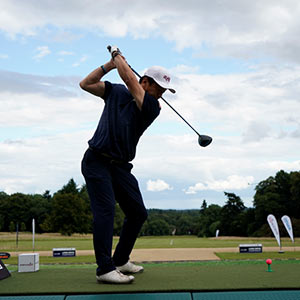 Charles puts his success this year down to a new training routine, “I’ve been playing golf for over 40 years and this really is my dream come true. I’ve always been the longest hitter between my friends and thought I would be good at long drive, but to actually win the American Golf U.K. Championship is an amazing feeling. I’ve come so close over the last 3 years. I lost in the final in 2015 and the semi-final in 2016 so I’ve been training hard for this year. I came up with my own special training in the swimming pool to improve my flexibility and it’s all paid off. I will just carry on working hard now and if I hit as well in the World Championships I will have a real chance.”

As Daniel Gathercole, Director of Marketing and Communications remarks this year’s event has been phenomenal and promises some exciting finishes when the winners take their places at the Volvik World Long Drive Championships in a few weeks time, “This event keeps getting better but I don’t think anyone expected what we’ve seen here today. We’ve had a top drive of 454 yards and over half the field in the Under 45’s going over 400. The Ladies have had a 338, 14 year old Elle Gibson at 326 yards and several over 300. And even the Seniors have hit over 400! Every category has had drives that would have won the 2016 World Championships so we’re really excited for our winners’ prospects when they head out to the U.S. to represent American Golf and the U.K.”