CALL OR RESERVE TO COLLECT IN STORE 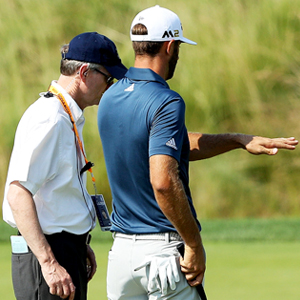 There was no mention of the US Open winner in the press release but it was pretty clear why this ruling has finally come about. Thank you, Dustin Johnson.

The USGA, in conjunction with the R&A, have announced a new local rule that when a player accidentally moves their ball on the green, as Johnson did at Oakmont and was subsequently docked a shot, there will be no penalty.

“We took the view that the rule was not working as well as it looks on paper and that we needed to try and address this,” David Rickman, executive director of governance at the R&A, told BBC Sport.

“Oakmont was clearly a difficult time and much has been said about that, but it was one of a number of cases that triggered this action.

“In practical terms it means that any competition organiser can introduce this Local Rule and it would mean any accidental movement of the ball on the putting green will be exempt from penalty,” added Rickman.

So if you move it you can put the ball back though if it moves due to wind or another outside agent you play it from its new position.

The USGA’s Mike Davis added: “There was simply too many times on the putting green where we were seeing players penalised, balls moving. We weren’t sure the cause. What’s been happening is that you’re seeing penalties assessed that the rules never really contemplated.”