There are few things more nauseating than the sightings of Michael Jordan chomping on a huge cigar at any Ryder Cup, so it was reassuring to hear that he gets on the nerves of the players too and, in particular, Ian Poulter.

You’ll remember the Saturday night at Medinah, yes that one, well. Poulter, speaking on the Golf.com podcast, revealed that Jordan’s presence spurred him on to closing with five birdies as he and Rory McIlroy got over the line against Jason Dufner and Zach Johnson. Cue one of the greatest comebacks in the game. And all thanks to a minor altercation with the basketball giant…

“I love basketball, so MJ being there was giving me a buzz,” Poulter said. “Then as that match was closing out, he was becoming more prominent and his position of where he was standing was becoming more and more invasive, shall I say. 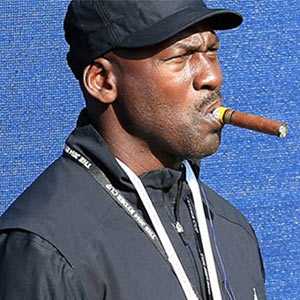 “The closest he got was when he kind of gave me a little jab in the chest going from the 16th green after I’ve holed the 25-footer downhill left to right. I’m walking off the green and I just see him. He’s right in my walkway. And he just wags his finger and shakes his head as if to say, ‘You son of a… how dare you hole that putt?’ And as I was walking past him, he gives me a little jab, and I’m saying to myself, ‘You know, you’re going to have to hit me harder than that.'”

No wait, the best bit is still to come…

Stick that in your cigar and smoke it, MJ.