Jordan Spieth relied on a new Titleist 718 T-MB driving iron as part of his set up for a thrilling victory at Royal Birkdale.

The Titleist staffer put the new club in the bag this week and used it to good effect on a number of his tee shots. He also used it from the practice ground on 13 just as it looked like his round had completely unraveled. He somehow escaped with just a bogey.

Another key club for Spieth as he overcome Matt Kuchar on a frantic final day was his Titleist 915 3-wood which helped him to the green on the 15th to set up a crucial eagle. 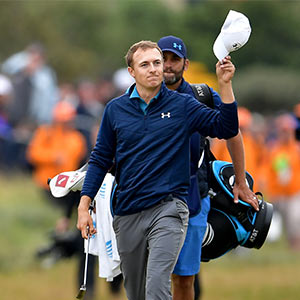 Spieth isn’t the quickest player to move into new equipment as he also still favours the Titleist 915 driver and 716 AP2 irons.

However, he was one of the first players to move into the Vokey SM6 wedges. We’ve spent time with Aaron Dill – the main Vokey technician on the PGA Tout to find out exactly how Spieth likes to have his wedges set up.

Spieth had dabbled with a Scotty Cameron Futura model earlier this season but went back to the same 009 model which he used for his previous two major victories in 2015.

He uses the Titleist Pro V1x ball and wears the Under Armour Spieth One shoes – obviously.

So what do the stats tell us about Spieth’s strengths and weaknesses in his Birkdale triumph?

He sat in 52nd place for driving distance with an average of 313 yards and was in 100th place for accuracy hitting less than 50 per cent of fairways. So driver is not a great strength.

His greens in regulation figure is much more impressive. Despite generally being wayward off the tee he was tied third for hitting greens at just under 70 per cent. So he’s a better second and third shot golfer.

Short game is one area where Spieth has always excelled. He was tied 30th for scrambling.

He averaged 28 putts which put him in a tie for 16th. He three-putted three times this week.

So the real strength of Spieth’s game is the ability to still score well when not in the best position off the tee.

Shoes: Under Armour Spieth One