Thomas and Spieth are good friends, don't you know?

Ridiculous questions are part and parcel of a golfer’s media conference. I’ve been lucky enough to sit in dozens down the years and there will always be at least one person who raises a smile by asking a question that you wouldn’t even ask if you out for a beer with the golfer on stage.

Then there are the Japanese journalists who, at every single major, ask each golfer that approaches the microphone what they think of their countryman Hideki Matsuyma. 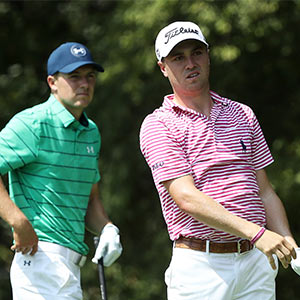 And now the new in-thing is for reporters to bring up his friendship with Jordan Spieth in every Justin Thomas press conference.

Take this week after the latter triumphed at the CJ Cup in Korea, for instance.

First up was this reporter who thinks that once you’ve played one golf course in a country you’ve played ’em all: “We know that you are very close friends with Jordan Spieth, who played at the Presidents Cup in Korea in 2015. Did Jordan tell you anything regarding the courses and how to attack them?”

Thomas managed to not sound too irritated: “No, Jordan definitely didn’t. It’s a totally different golf course and a totally different tournament. It’s not like you can just play the same throughout the entire country. He just wished me luck. No one has ever played here before so you can’t really ask for advice on how to play in a place no one’s ever played before. It was really just a lot of unknown coming here just trying to get the lay of the land as much as I could when I got here in these past couple of days.”

Next up, this bizarre segue: Are you used to such windy conditions? If you were to give Jordan Spieth any advice playing on this course, what would you say?”

Thomas replied: “Jordan has played a lot of golf in the wind. He doesn’t need advice from me to help him.” He probably stopped just shy of screaming “JORDAN HAS WON THE OPEN!”

The final question – “If you were to come back next year would you convince your good friend Jordan Spieth to come with you?” – got exactly the response it deserved: “I don’t care what he does.”