Thomas steps out of the major shadows

Thomas – so the detractors claimed – was the guy on the fringes, the happy presence on the boat at spring break, as his mates did the serious winning.

But the comparisons were always unfair. Thomas has been picking up trophies since he first took up the game at two years old.

And now he’s got one of the biggest of them all.

Thomas’s play in the final round, barring a potential Van de Velde moment when stuck behind the lip of a bunker on the 18th, was unbelievable.

A tournament that had, at times, struggled to get into life – beset by complaints of slow play and super fast greens – suddenly burst into being as the shadows began to draw in at the North Carolina venue.

At one point, there were five tied for the lead. But it was Thomas who struck clear with two absolute moments of brilliance.

The first was a 50-foot chip in on the 13th that took him clear of the pack for the first time.

The second was an exceptional iron on the 17th, one of the most brutal holes of the infamous Green Mile, which drew perfectly over the water and came to rest little more than 10 feet away.

“That pin today was brutal,” Thomas said at the trophy ceremony. “To make a birdie there was beyond a bonus.”

There were nervous moments along the way, of course, but Thomas has learned his lessons about dealing with the cauldron of major contention.

It had been a different story two months earlier. After a record-tying 63 in the third round at Erin Hills, just the fifth time anyone had posted a round that low in the history of the old tournament, the 24-year-old stood two off the lead.

But he bogeyed three of the first five holes, Brooks Koepka got off to a fast start and Thomas barely hung on to the back of the top 10.

Were the early omens at Quail Hollow a major case of déjà vu? Bogeys at the first and third were sandwiched between a birdie at the second.

This time, though, he had learned patience. 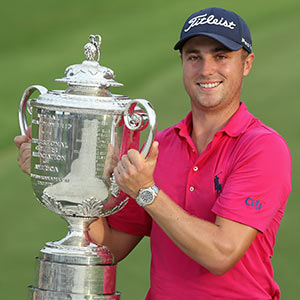 “I felt like that at the US Open, although Brooks had an unbelievable round, I didn’t feel like I had my best stuff that day,” he said. “But I still learned I needed to be a little bit more patient to have a better finish.

“Obviously you play to win and I had a great opportunity to win today but I knew that no matter what my game was at on the first tee, I just needed to be patient.

“I felt like I had the game to get it done, it was just a matter of if I did or not.”

He did, in some style too.

Picking up shots at the seventh and the ninth, Thomas arrived at a back nine that he’d utterly bossed for the past couple of days.

From the second round onwards, he recorded eight birdies and only one bogey – at the last when the event was all but won.

It was the crowning salute for a game built on power and aggression.

Rory McIlroy and Dustin Johnson might get all the attention when it comes to long hitting, but Thomas can keep up with the best of them.

He’s almost skin and bone – weighing in at only 145lbs – but he generates massive speed, bludgeoning his way round a course.

And like McIlroy, he’s also got the ball striking to back it up.

No one on the PGA Tour has recorded more eagles this year than Thomas, and only two can better his birdie average.

It’s scoring that’s always going to put him in the hunt when everything’s on song and, in 2017, that’s been more often than not.

Thomas had already won three times this season, his success at the Sony Open in Hawaii in January marked by a 59 that was only the seventh in the tour’s history.

Thomas was the youngest to record it.

Now talk of Big Threes or Fours are going to need revision.

For as much as we all yearn for rivalries to match the days of Player, Palmer and Nicklaus, it’s a younger breed starting to dominate the game.

A breed that collectively believes and supports each other. As Thomas walked off in triumph, they were all waiting for him green side. He is now the third consecutive major winner under 30.

“It’s a cool thing we have going on right now with the young golfers. If we can’t play well we want the others to play well. Obviously, it was great to win but I feel like it’s a part of a little group now.”

As the feats of Tiger begin to be consigned to memory, and Thomas and Spieth now lead the way, golf – at the highest level – has never looked in better shape.