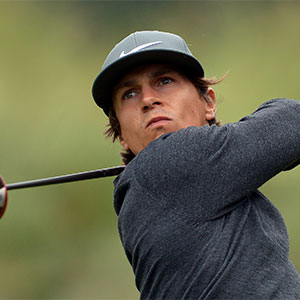 The Dane came second at this event in 2012 but went one better, posting a one under par 71 over the Old Course at St Andrews to finish the week on 18 under par, two shots clear of the American duo of Brooks Koepka and Chris Stroud.

“It's been a very tough year and standing here with this trophy is unbelievable. To win over these three golf courses and finishing off especially on St. Andrews is a great feeling.”

Englishman Chris Wood closed with a bogey-free 65 to finish a shot further back alongside Benjamin Hebert, Bernd Wiesberger, Joakim Lagergren and Kiradech Aphibarnrat.

Olesen began his final round with a three-shot lead over the chasing pack, but followed a birdie from eight feet on the first with a double bogey on the second and a bogey at the next to surrender the outright lead.

He bounced back in style, however, picking up shots at the fourth and fifth holes to return to the top of the leaderboard. After safely parring the next nine holes, Olesen extended his advantage to two strokes with a brilliant birdie from 50 feet at the 15th.

He then parred the notorious 17th to set up a victory stroll down the 18th – one of golf’s most iconic holes – before collecting a cheque for €708,171 which moves him up 99 places up The Race to Dubai (from 124th to 25th), into the top 75 in the World Ranking and to the head of the European Ryder Cup Points List.

Olsen added: “It's been a very tough season for me, and I would like to give a special thanks to my coach's family and friends, and anyone who has been there. I kept believing.

“I shot a lot of good rounds actually but I couldn't manage to keep it together. It was nice this week just to play three great rounds of golf the first three and kept it together in this last round.”