Tiger Woods confirms attendance on 10th anniversary of ‘that’ shot 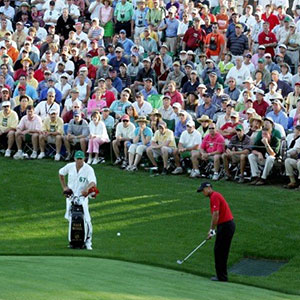 “In your life have you seen anything like that?”

The answer to that question was a universal ‘no’ when Tiger Woods played arguably the most famous shot ever hit at The Masters.

Whether or not it was the best shot we’ve ever seen at Augusta, it is certainly the one most golf fans have seen the more than any other.

And it would have been a crying shame had Tiger not been in the field on the 10th anniversary of that shot and his last Masters victory.

Everyone has seen the shot but what was it’s significance at the time?

Tiger was leading Chris Di Marco by one as the pair stood on the 16th tee.

The remarkable chip-in for birdie from the fringe of the rough looked to have sealed a fourth Green Jacket for Tiger but he then bogeyed the final two holes resulting in a play-off.

Tiger birdied the first play-off hole to finish what had actually been one of the most unconvincing of his 14 Major titles.

There was a mixed reaction from the golfing world when Tiger announced he would play at the 2015 Masters following a two-month break.

The former world number one, who dropped out of the top 100 last week, shot his worst ever professional round at the Waste Management Phoenix Open in February and struggled in particular with his short game.

At Torrey Pines the following tournament, he continued to struggle before pulling out citing lower back problems.

Despite his woeful form, most seem to agree that the Masters is a better tournament with Tiger Woods in it.

Phil Mickelson said: "I just don’t think anybody would miss it if they were in it, if they were physically able to play.

"And he has had such a good short game and such a great game throughout his career, I think it’s going to be an easy fix. I think his game will be sharp.” Ian Poulter added: “The best show on earth just got better."

With the way Tiger was chipping prior to his self-imposed exile from the game, it is unlikely we will see a repeat of the magic witnessed on the 16th in 2005.

So click on the link to enjoy it one more time.