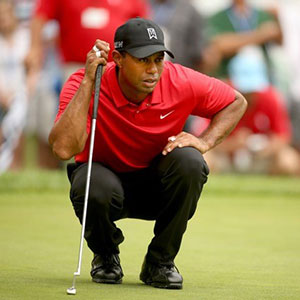 There was genuine excitement around the golfing community when Tiger Woods announced he would be returning to competitive play at the Safeway Open, but as of Monday night the 14-time major champion has withdrawn from the event and also ruled out playing next month’s Turkish Airlines Open.

"After a lot of soul searching and honest reflection, I know that I am not yet ready to play on the PGA Tour or compete in Turkey," Woods said on his official website. "My health is good, and I feel strong, but my game is vulnerable and not where it needs to be."

It appears the reason for Woods’ latest withdrawal is down to his short game and not the two back surgeries he underwent last year. Woods confidante Notah Begay III revealed Tiger is physically healthy and ready to go, but his short game play was simply undercooked. "His game wasn't where he wanted it to be," Begay said on Golf Channel. "It's just not having enough time to get the reps in would be my guess based on conversations with Tiger."

Woods has now switched his attention to his own Hero World Challenge in December for his return.

"When I announced last week I was going to Safeway, I had every intention of playing, or I wouldn't have committed," Woods said. "I spent a week with the U.S. Ryder Cup Team, an honour and experience that inspired me even more to play. I practiced the last several days in California, but after a lot of hours, I knew I wasn't ready to compete against the best golfers in the world."

Woods’ full swing is looking good according to those who have been on the golf course during training sessions with the American, but apparently his struggles with shots around the greens is an ongoing issue.

"Obviously it's not where he wants it to be. It's nothing to be concerned around. It's going to come. It's just trying to find the right tournament to return to. The last thing that comes into play that anyone who's been hurt knows is the acute very precise golf shots," Begay said.

Woods hasn't played since August 2015, when he finished T-10 at the Wyndham Championship.