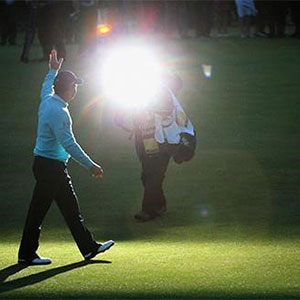 Tom Watson and Sir Nick Faldo were both cheered over the Swilcan Bridge and all the way up to the 18th green of the Old Course on Friday.

With 75 Open appearances between them – 38 for Watson and 37 for Faldo – not to mention eight Claret Jugs these two greats of the game truly earned their ovations.

What an unlikely couple they make, and yet between them they have dominated this championship for the past 40 years.

While Watson has won five times to Faldo's three, the Englishman has actually been the more consistent. On a further 16 occasions he finished inside the top 20, compared to eight for Watson. He has missed 10 cuts to Watson's 11 but all of Faldo's have come since 1999.

Their Open careers are intertwined and it looks like they finished on the same day.

But, true to form, they did it their own way.

The countdown to Watson's emotional farewell began months ago when the 65-year-old contacted the R&A's outgoing chief executive, Peter Dawson, to plead for one final exemption and the chance to say goodbye at St Andrews. It continued with a special visit across the Atlantic to St Andrews in May to oblige his blue-chip sponsors and conduct a raft of media interviews. He prepared for the Open by playing a full schedule of Champions Tour events.

Faldo, on the other hand, decided a few months ago that this would also be his last Open. Then, on Twitter, he said he had changed his mind, and that he wanted to play at Troon next year as it was the first Open he had ever attended and Birkdale the year after that because his own Open debut came there in 1976. The Open was his first, and presumably last, event of the year.

Several years ago, he decided he did not wish to become a ceremonial golfer. He last played the Masters in 2006 and has not made the cut at the Open since finishing 11th here at St Andrews the previous year. Insular, single-minded and obsessive as a player, just turning up never appealed to him. Which is fair enough.

After he finished yesterday and reflected on a miserable opening round of 83 – no matter that it had been followed by a hugely creditable 71 – he indicated that this would be the last time the Open saw him in a playing capacity.

So we are still none the wiser really.

When Faldo, the champion golfer of the year in 1987, 90 and 92, holed a putt for an unlikely birdie on the 17th, he raised his arms in mock celebration. Anybody else would have graciously accepted the crowd's warm applause.

Before crossing the bridge, he changed into the Pringle sweater he wore for the last round at Muirfield in 1987. In a practice round, this felt like a nice touch. On the occasion off his final walk up the 18th it was just unnecessary.

He finished with a brave par save, grinding out one last four-footer before taking the applause.

By contrast, Watson, who in 2009 defied the passing of time when he finished second to Stewart Cink, here held back the onset of night, rushing down the last three fairways to ensure his much-anticipated valedictory stroll up the 18th did not take place in front of one man and his dog at dawn the following morning.

Struggling to hold it together and determined not to shed a tear in public, he shanked a chip and quickly, apologetically, three-putted for a bogey – not that anyone cared.

He milked the applause every step of the way – and why not.

Now they have both gone – bar another change of heart from Faldo.

One of them universally loved, worshipped in fact.

The other admired, respected – and by some of us loved also, despite it all. My generation grew up with Faldo as their hero and we will never forget that broad-shouldered, single-minded march down the fairways, the one serial Major champion of our lifetime from these shores, at least until Rory McIlroy came on to the scene.

So thanks to Tom, that goes without saying. But thanks also to Nick. You have both been magnificent Open champions.