Tom Watson speaks ahead of his final Open outing 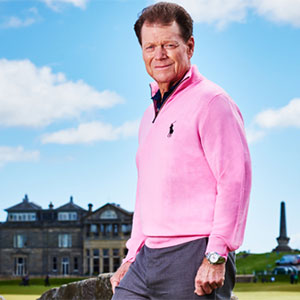 Tom Sturges Watson has never won at St Andrews – or at least hasn’t yet – but few would begrudge him the chance to bring down the curtain here, even though he had to make a special request.

“I asked Peter Dawson last year if it would be possible for me to play one more Open Championship, because last year it was the end of my exemption, to be able to play St Andrews in my last Open but he said “I’ll get back to you”. And very shortly afterwards he said: “You’re on”.

It can be taken as read that Dawson, the R&A’s chief executive, did not have to think for too long before making what is, it should be remembered, an extraordinary exception.

“Tom is the most successful Open champion still playing and has made a huge contribution to the Championship over the last 40 years,” said Dawson.

“His performances in winning the Open on five occasions were truly outstanding and to come so close to winning a sixth in 2009 demonstrates his longevity. I’m sure fans everywhere will look forward to seeing him play again at St Andrews.”

For his part, the 65-year-old makes a typically lyrical case about why the end should come on the Old Course.

“I love links golf and this is the father of links golf,” said Watson. “This golf course, the history, almost every great player has played here.

It is less well known that Watson’s love affair with the traditional form of the game was not immediate, even if his first attempt to win the Open was a successful one.

If asked by a Spieth or a Fowler to explain what it takes to become a great Open player you might be surprised by the answer.

“Don’t do what I did,” he insists. “Embrace links golf earlier than I did. Even though I won early I had a love-hate for the golf courses themselves.

“A lot of golfers, especially in poor conditions, are going to miss greens and that was my forte – when I missed a green I was able to get the ball up and down. That’s what you have to do here.”

The knowing golf fan will only have eyes for one man at St Andrews.

A 65-year-old with a slight stoop and a warm smile. Here for one last time. Don’t miss it.