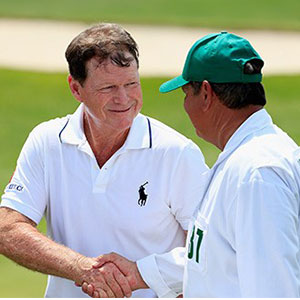 After making the cut at the RBC Heritage, Tom Watson declared his intention of making the 2016 Masters tournament his last appearance.

Watson, the 1977 and '81 champion at Augusta National, said: “The Masters may be my last year next year."

The eight time Major winner and PGA Tour legend is expected to make his final appearance at The Open in July.

“It is ... unless I finish in the top 10," said Watson, who has been granted an exemption by the R&A to allow him to make his final Open appearance.

He cited his age as one of the major factors in his decision to call time on his Augusta appearances.

“The distance is ebbing away in this old body, and that’s something I have to deal with and understand (that) there’s going to be a time when I have to hang it up,” Watson conceded.

“The handwriting is on the wall as far as me competing out here against the kids. They hit it 30, 40, 50 yards farther in the air.

“Even a course like this, if I don’t have a chance to win, I’m taking up a spot of a guy who has the tools to win.

“I’m still taking it, like they said in (the movie) ‘Bull Durham,’ one week at a time, one game, one shot at a time,” Watson said.

Watson is hoping to sign-out in style in his final Open appearance, adding: “I know there’ll be some emotion in this old body of mine, playing there.

“I hope it’ll be on Sunday, when I say goodbye to the Open Championship at St. Andrews."