Tony Jacklin: 30 years on from creating a huge slice of Ryder Cup history

It was a case of 14th time lucky as Europe finally won the Ryder Cup on American soil. Mark Townsend caught up with the legendary skipper Tony Jacklin.

Thirty years ago this week 12 European golfers made history winning the Ryder Cup for the first time on American soil.

After an unbeaten record of 13-0 over 60 years we beat them over there and, even looking back three decades on, it remains the most perfect week – doing it in Jack Nicklaus’ own backyard, Muirfield Village, with Seve holing the winning putt.

As a 16-year-old it was the greatest thing in any sport that I had witnessed and that remains the case today.

At the heart of it all was Tony Jacklin. The two-time major winner’s first captaincy stint had involved just four months’ planning having only been persuaded to take the job in May 1983. By the time the matches had come along in October he had cajoled our best player, Seve Ballesteros, back into the fold after a bust-up over appearance money, had organised the best clothing, shoes and golf bags and got his team to within a point of a first victory since 1957.

Two years later the win finally happened at The Belfry and, come the 1987 matches, Europe rolled into Muirfield Village with four major winners in their ranks – Seve, Faldo, Lyle and Langer – but also an Ian Woosnam in the best form of his life and a 21-year-old rookie Jose Maria Olazabal.

America’s Lanny Wadkins was bullish ahead of the matches: “Ballesteros and Langer haven’t won over here in two years. If they’re the best then why can’t they come over here against the best fields and win?” Or maybe he was just afraid.

This time Europe didn’t arrive in ‘the back of the bus’ but on Concorde, they would be dressed in cashmere, stay in the houses beside the 1st hole and, most importantly, they had a captain who fully expected to make history.

Things now go by at warped speed when you get into your 70s (Jacklin has just turned 73), it is amazing how time flies by. There’s only one first and it was an incredible achievement.

People forget that the success that we had with the Ryder Cup in the 80s really spawned the Presidents and Solheim Cups. It was a very significant period and it caught everyone’s imagination.


How much of a plan did you have going into the week?

I was making judgements as I went along, I was talking to the guys but also looking at body language and chemistry. Things can change; Woosnam and Faldo were a partnership in 1987 but it wasn’t the same two years later at The Belfry. I was trying to observe everything and do what was best for the team.

Everybody knew whatever I did was for the benefit of the team and they trusted me on that basis.


The first morning was a particularly nervy affair and, after nine holes, we were down in all four foursomes?

You do your due diligence and once they have gone out all you can do is pray. You are down but you are trying to stay up mentally as a group. We were always anticipating doing well as the confidence was there. My job was to keep boosting that confidence and to keep telling them how good they were. It’s all about confidence, when I started playing in Ryder Cups it was more bravado. Once you have won, as we had in 1985, that gives you a tremendous boost.

The caddies played a great role and I was onto their cases as much as I was with the players, to keep the players up and not get down if they were behind. It was a real all-round effort and a bigger job than people realised.


We then whitewashed the fourballs for the first time in the afternoon. Can you stop to actually enjoy what is happening?

You’re not enjoying it at the time as you are so busy with your responsibilities and you are so into the thing, it’s not until afterwards that you can enjoy it.

Nothing was set in stone so I was moving along with the thing instinctively as I read it. As a captain you are trying to be all things to all people all the time, you could see that with Paul McGinley at Gleneagles, and you get so into it it’s amazing. If you are competitive, to be in the middle of it is a great place to be.


And then the following morning thousands of Stars and Stripes flags were dished out to the home fans?

I had been party to seeing that happen behind the scenes in the clubhouse but that was a bit like closing the gate after the horse had bolted. We were very confident and we saw that as being a bit of bravado.

One of the key things was that they had held 11 Memorial Tournaments there and the bulk of the American crowd were Memorial people, they had got used to seeing that event and there was polite applause for both sides and they weren’t very partisan.

I remember Jack and the general manager John Hines being behind the scenes thinking they needed to do something as this thing was slipping away.


Four players only played once before the singles, how comfortable were you leaving people out?

I didn’t apologise for that. I had a good one-on-one relationship with everybody and I made it clear that no decisions would be made on a personal level and it was all about the team as I saw it. I never had any problem with any dissenters and they realised that if they weren’t out there playing they would be supporting. 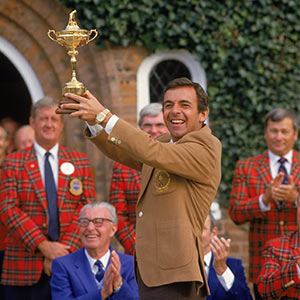 You made the most of the big guns, with Seve, Olazabal, Woosnam, Langer and Faldo not missing a match and Lyle only missing one, but it was also a big team effort, particularly when it came to the singles?

That was the importance of having a team room. Before my first captaincy in 1983 we didn’t have a team room, that was something I instigated.

We all needed to be together privately. Before 1983 you were at liberty to go to a local restaurant with your wife and do what you wanted and that wasn’t good enough for what we were trying to achieve.

It was a place where we could regroup and create this positive atmosphere.

When Eamonn Darcy beat Ben Crenshaw he was up for it. Everybody can’t necessarily be a major champion. In 1989 Seve, Faldo and Woosnam lost in the singles and it was down to the likes of Christy O’Connor Jr and Ronan Rafferty to add the points and that is the beauty of being in a team. They came through and they are as much a part of it as the great players were. They were all massive.

He was amazing. The first job I had as captain in ‘83 was to bring Seve back into it, he had been banned and he was hurt. We had breakfast and I said to him that I’m going to build this but that I couldn’t do it without him. There was no greater Ryder Cup player than Seve Ballesteros – it wasn’t just what he could do on his own, it was his influence on the rest of the team as well.

Europe went into the final day with a five-point lead, that was down to 12-11 at one point. You seemed to be in most places throughout the singles?

I was everywhere I could be. I had a little television on the cart but I was also flying around trying to be at the end of every match.

I was there when Eamonn holed that putt on 18 to beat Crenshaw and was back to the 17th with Seve when it all finished and we had definitely won.

One great memory was to get every player to get in the carts after the press conferences and go to where all the European fans. There were about a thousand of them. We all walked in with the Ryder Cup, I said we would only need to stay 10 minutes but the place was in uproar and the players weren’t going anywhere. They wanted to be with their supporters and there were about a thousand of them.

A school friend and I went up to Heathrow to welcome the team back on the Monday night. For the European golf fan those three days surpassed all the majors we were winning at the time, it was incredible…

I remember that reception very well, nothing had happened in golf that would create that sort of emotion in the UK.

It was a joyous time, for us it was everything. The Americans always had bigger tournaments, more money, bigger everything. It was David and Goliath.

We created history but we enjoyed the doing of it.

The outcome and the winning there was the most significant thing to happen in any Ryder Cup before or since and I still think that. Everybody gelled and we had that private team room and that was so essential, it was just the players and the wives and everybody else was outside. It was as much won there behind the scenes with the confidence and the environment that we created amongst ourselves.

It was a monumental victory. I see the players from time to time, I see Gordon Brand Jr every year at the British Par 3, and it is a bond that we have between us and it can never be taken away.