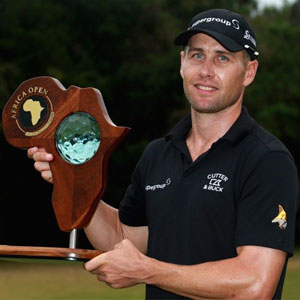 Trevor Fisher Jnr had to battle his nerves to win the Africa Ope, eventually taking the trophy by a massive five shot margin. The South African took the title after ending the day eight-under and -24 for the tournament.

Fisher Jnr, who claimed to be suffering from nerves through the final holes, said: "It's always a bit nerve wracking leading, so you always try not to think about the result.

"I think I did a good job today and stayed in the moment. I was nervous the last few holes. But it was a great day, I played well. The putter was amazing and I sank some amazing putts today. It must have been written in the stars."

He had been put under continued pressure by Englishman Matt Ford, who finished in clear second at -19. Ford had been working as a postman until advancing through November’s Qualifying School at the tenth attempt.

Fisher Jnr, had nothing but admiration for Ford's valiant efforts, saying: "He's a little British Bulldog! He just sank putts all day and I thought - I'm not going to get away from this guy. He made a birdie, then I made a birdie, it was quite tough. Then on the ninth hole I made a great birdie there and he made a five, so I think that's where it turned around"

With this maiden win, Fisher Jnr continues the line of South African winners at this tournament since its inception in 2010.