10 of the UK and Ireland’s best amateur golfers will be taking their seats on the plane to the Tournament of Champions in Mauritius on Wednesday 11th October. The lucky competitors qualified for the Heritage Resorts Tournament of Champions by beating the rest of the field at their respective American Golf tournaments at the Belfry in September. 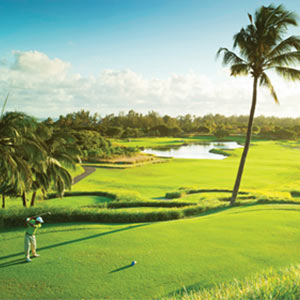 The weather at Heritage le Telfair on the unspoilt south coast of Mauritius promises to be a little more favourable than the conditions players faced at The Belfry!

Heritage Resorts offers luxury hospitality, superb beaches and arguably the best golf in the Indian Ocean as Daniel Gathercole, Director of Marketing and Communications at American Golf explains, “Heritage Le Telfair is hosting the AfraAsia Bank Mauritius Open in November so the course will be a real test of our competitors’ skills. They have all already shown us what they can do here in the UK, but to take on the challenge of another championship course will really show us who is the best overall golfer in the competition.”

The Heritage Resorts Tournament of Champions title will be contested over 36 Holes and the ultimate American Golf Tour winner will be one of the following pairs:

The General Manager of Heritage Golf Club, Jonathan Menteath, is looking forward to welcoming the competitors, “American Golf has built a fabulous portfolio of events, so it is our pleasure to be able to provide their Grand Final prizes this year. We look forward to welcoming them to Heritage Resorts and giving the champions an unforgettable experience here in Mauritius,” comments.

All of the Championship finals will be shown on Sky Sports across October and November, starting on 17th October. The American Golf Events series is a vital part of American Golf’s drive to get more people out playing golf more often. In its fourth year, the Championships go from strength to strength and with the quality of golf and personality on show through this year’s qualifiers and finals, golf with American Golf has a very bright future.