Great Britain and Ireland have only twice won on American soil and a third victory never looked on the cards against a very impressive home side at Los Angeles Country Club.

US captain Spider Miller was on the wrong end of a record loss at Lytham two years ago but he oversaw a comprehensive 19-7 victory against Andrew Ingram’s GB&I side.

This was the 11th home win in the past 13 matches and every American player contributed at least a point.

The overall match was actually decided by the opening singles as LACC member Stewart Hagestad got his revenge for a defeat on Saturday to a previously unbeaten Jack Singh Brar. There was a bizarre end as Brar had to concede the 17th after leaving his recovery in a greenside bunker and then touching the sand with his club which led to a loss of hole.

Norman Xiong, who began his week with an 8&7 thumping of Alfie Plant and Harry Ellis in the foursomes, saw his chances to win all four of his matches come undone when he doubled the 18th against Scott Gregory, the Englishman making a four to sign off a great personal week with two and a half points. It was the first half of the weekend.

Xiong’s partner Collin Morikawa did go 4-0 after taking down Ellis at the 17th. Moments later Doug Ghim, who lost the last two holes in the final of the US Amateur to his team-mate Doc Redman, added his name to the history books with his fourth success of the weekend and Maverick McNealy made it an unprecedented perfect three with his win over Alfie Plant.

Only David Boote posted a full point for the visitors in the singles. 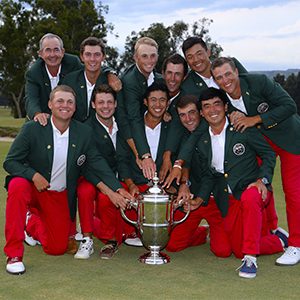 McNealy arrived at Lytham as the second best amateur in the world; the then 19-year-old left with half a point from three matches having sat out the Sunday foursomes.

On the back of one and a half day’s golf some/plenty made their quick assumptions of his game.

The Californian arrived in LA as still the No. 2 and left with a very different record.

So how does the 21-year-old, who will now turn pro and play in the season-opening Safeway Open in October, view the two experiences? He was the only player who was at Lytham.

“One, the course suits our game a lot more. The home team’s had a huge advantage in the Walker Cups the last 20 years,” said McNealy.

“But two, I think this team is more prepared for this weekend. We were fired up and ready to go and we were all ready to play and to compete starting on Wednesday. And we were focused and really well prepared through our preparation and I think that showed through the good start to these matches.”

McNealy played in the anchor match in all four series of matches but, while you might surmise that he was the most trusted player the truth is somewhat different.

“It gives me more time to eat. And I’m an incredibly slow eater so I appreciate my team-mates giving me that little extra time to prepare and regroup and get some food down between rounds and that was huge for me those last few holes.”

Jack Singh Brar was the star of the GB&I show and he also gave us one of the best replies during his Saturday singles.

The Lytham Trophy winner was six up on the local favourite and LACC member Stewart Hagestad when the American finally won a hole at the 11th.

And he gave an interesting perspective on the home crowds: “I had to laugh about it. I could hit inside him and they would be like, ‘Go Stewart’. There was just no claps for me. But you expect that out here.”

The 15th on the North Course normally measures 139 yards off the back tees. On Saturday the players faced a hole of just 78 yards in the singles.

To put that into some sort of perspective: the Postage Stamp 8th at Royal Troon measures 123 yards and the 17th at Sawgrass 137.

American Ghim halved it in twos with Wales’ David Boote. The US Amateur runner-up said of the precise wedge that had just eight yards of green to go at: “Half the battle was trying to decide whether to use a tee or put it on the ground. I don’t recall ever playing a hole that short since I was like maybe six years old and I used like a 7-iron then.”

Otherwise there was opportunity to reach short par 4s, a par 3 of 303 yards, pars being switched around and a visit to the Bermuda rough meant you weren’t going to then find the green. All classic USGA fare.

Sadly no match reached the 17th in the Saturday foursomes so it came as something of a surprise when all the home players were aiming down the 2nd fairway.

‘Spider’ Miller claimed that a lot of his team hit the ball from left to right which brought a barranca – ditch, to you and me – down the right into play.

So they all smashed drivers down the adjacent fairway which left a terrible angle but a clear second shot to the distant green.

And it must have made some sort of sense as the GB&I players were doing the same on the Sunday.

The US Open visits here in 2023, Mike Davis walked the course with Gil Hanse, and you might expect to see some trees to have sprouted by the time the USGA’s showpiece visits here in six years to stop the game’s greats doing likewise.

The 47th Walker Cup will take place at Royal Liverpool for the second (official) time in September 2019. If you’ve not been to spectate at this competition then try and do so, it’s a genuinely sensational experience.

Crowds amble down the fairways behind the players before circling the greens, the caddies are all local and are drawn randomly, the courses are guaranteed to be incredible, lasers are allowed, there are no logos (obviously), the swings are the players’ own and it’s magical.

This week there won’t be too many headlines or column inches yet when this player or that wins a major then we all lament not paying enough attention in Walker Cup week.