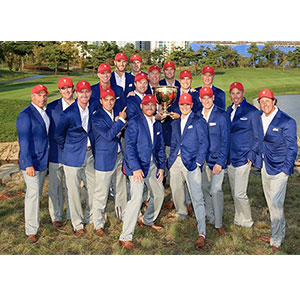 A sixth straight victory for the United States, and a ninth in 11 matches, as Bill Haas, son of American captain Jay, claimed the decisive point against Sang-moon Bae in Korea.

After day one Nick Price’s side trailed 4-1 but were only a point adrift heading into the singles where the United States led, at one stage, in nine of the 12 matches.

But the Internationals again rallied and a second overall victory seemed possible. But an 18-footer from Chris Kirk and a miss from four feet by Anirban Lahiri swung the match.

In the end it came down to the final match and Bae, who will soon have to temporarily quit golf to take up national service, made par saves on 16 and 17 but then fatted a pitch to the last and Haas jr sealed the deal.

Branden Grace (5/5) and Louis Oosthuizen (4.5/5) were the stars of Price’s side, Jason Day contributed just half a point, while Phil Mickelson, like Haas a captain’s pick, led the way for the Americans along with Zach Johnson (3.5/5).

"It wasn't pretty down the stretch there, if I could have parred the last hole, beaten Phil Walton; not that I remember his name very well.

“But yeah, I thought, that's 20 years ago. And Bill was there watching me play, and I remember that I wish I would have just gotten up on the 18th hole and swung as hard as I could like I was in a driving contest and maybe hit a better shot. He's heard me say that.

"So for him to do that down the stretch, is not vindication or anything like that, but just how things work out, and 20 years went by in a blink. Glad it worked out.”