The Walker Cup just got even better 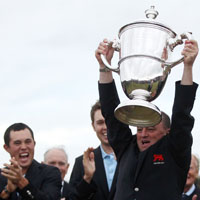 The incentive to make the Walker Cup teams in 2021 and 2025 just got even bigger with the news that Seminole (Florida) and Cypress Point (California) will host the future domestic matches.

Next year we are off to Los Angeles Country Club, the venue for the 2023 US Open, before Royal Liverpool again play host having staged the 1983 matches as well as an unofficial one in 1921.

And then we are off to Seminole, a Donald Ross course which is yet to hold a USGA championship, and a new May date in the diary before reverting to its September slot at Cypress Point in 2025.

The Californian course, thought by many to be the best in the world, has held the matches once back in 1981. And is hardly overplayed with around eight groups populating the famous links on a daily basis.