WATCH: Tiger Woods records worst ever round as woes continue 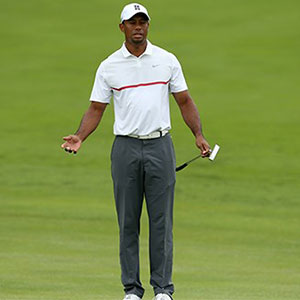 Tiger Woods recorded his worst round as a professional, after carding an 85 in round three at Muirfield Village Golf Club.

The former World Number One still returning from injury has now scored two 80+ rounds this year, in an awful patch of form for the 14-time Major winner.

Woods refused to speak to the media after his round, which is three shots worse than his previous career worst round of 82 at this year's Phoenix Open.

“I’ve always wanted to play with him,” Blair said. “As a little kid that was kind of my dream growing up. But it was unfortunate to see him not play great.

“I thought he handled it great.

"He never got super outwardly emotional. … But I don’t think he ever got disrespectful out there. And he was always super courteous to me and friendly.

"It was nice to see that.

“I wish he would have played better, but it was still fun."

In stark contrast to Woods, Blair made four birdies and shot a 2-under 70.

Woods made bogeys at the 4th and 5th, consecutive double-bogeys at the 8th and 9th meant a score of 42 at the turn. Woods found two bunkers on the par-3 eighth hole and his approach at the 9th found it's way into the water.

Another bogey at the 17th, was followed by a nightmare end to his round. Woods drove into the stream at left of the fairway, was forced to take a drop and then proceeded to hit his third shot short of the green.

A mis-hit his chip; saw his ball roll down hill on the frontside of the green into a position further from the pin than where it started. Woods next chip found a bunker, then two-putted.

This quadruple-bogey on 18 was the sixth of his PGA Tour career.

Woods carded a two over 74 on Sunday to finish dead last on +14.