Weekend Winners: Hatton gets the job done at St Andrews 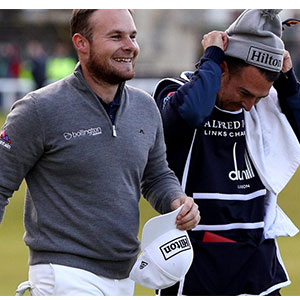 Tyrrell Hatton won his first European title at St Andrews after a phenomenal display at the Alfred Dunhill Links Championship. It was Saturday’s round of 62 on the Old Course that put the young Englishman in control heading into the final round.

Hatton started well with three birdies in his opening five holes to extend his lead from Ross Fisher and Richard Sterne and after making pars at the next three holes, Hatton sunk his 20 foot birdie putt at the ninth to cover the front nine in 32.

Hatton dropped his only shot of the day at the 17th after getting hitting his second into the road hole bunker. A par at the last was enough to seal a four shot victory.

“It feels amazing. I’ve wanted this moment since I was a six year old walking around Wentworth. It’s incredible.

“I was pretty nervous all day. I started to feel a little bit more comfortable, sort of down 14, 15, but I’m just so happy I got over the line.

Ha Na Jang got her third win of the season after a final round 71 at the Taiwan Championship.

Three birdies in her fist six holes got her to 19 under par and pulled away from a defiant Shanshan Feng, but a couple of sloppy holes meant she dropped back to 17 under.

Feng birdied five of her last 11 holes but 9 straight pars from Jang was enough to get the job done for the third time this season.

“I was like nervous every hole,” Jang said. “Shanshan really good play today. That’s why I got very nervous. And then I’m just simple every hole because weather is just so bad. And then just keep going the fairway and the green.”

Jang joins Ariya Jutanugarn and Lydia Ko as the third player with at least three victories on the LPGA this season. Like Jutanugarn, all of her career victories have come in 2016.

On the Ladies European Tour it as a lot more complex as Beth Allen revered a four shot deficit with nine holes to play to win her second LET title at the Lacoste Ladies Open De France.

The 34-year-old Californian fired rounds of 64, 67, 68 and 67 for a total of 14-under-par to earn her second title on the Ladies European Tour following the 2015 ISPS HANDA Ladies European Masters.

Allen said: “It feels so great. The first time I won it was from quite far back so I had to wait, but it was really great to win in the last group.”

She added: “The 11th hole is always on everyone’s mind and I have played it in one-under this week, which is kind of incredible. I probably won it there really, because I know a lot of people had a lot of nightmares there. I knew I needed to stay patient. I wasn’t happy with my first nine but I knew that if I could stay patient around that area I could have a chance. In the end, I did.”