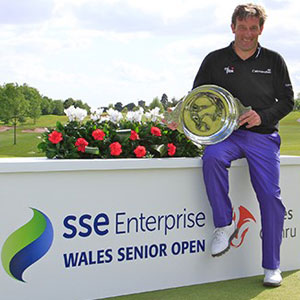 A shocked Paul Wesselingh left Ian Woosnam waiting for a long overdue victory in his homeland after a two shot victory at the Wales Senior Open.

The 53 year old from Derby conquered Celtic Manor's Roman Road course taking the title and a £37,500 first prize with a closing 67 seven under par total of 203.

Wesselingh now has eight Senior Tour titles in the three years since he joined the ranks of the over-50s, confessed that victory had been a bit of a shock to him: “I honestly thought Ian would win. I played with him in the third round of the Senior PGA Championship last week and he played so well that I felt I would have to hang on to his coat-tails to stay with him today! As it turned out, I had a perfect game plan.”

"I knew with the windy conditions I had to keep the ball under control and not to go for any tricky pins. I had been putting so well all week I had confidence in my short game and didn’t worry if I was 30 or 40 feet away. The day turned around the 11th and 12th. Woosie’s second shot spun off the green at the 11th and he took a bogey then I birdied the next to move two ahead. That was it, really.”

Woosnam, had held the overnight lead with Wesselingh, but the Welsh favourite – without a win in his native country for a quarter of a century – was unable to maintain the pace and lost out to the Englishman.

The former Masters Champion, Woosnam, carded a final round 69 for tournament total 205, and a share of second place alongside Australian Peter Fowler.

Despite the crowds providing strong support for Woosnam, it proved to be another frustrating finish for the Welshman. With the Welshman admitting: “Paul played really well and I just didn’t play good enough golf today. I hit too many wrong clubs."

Wesselingh has won back-to-back - per appearances - on the European Senior Tour having claimed the end of season MCB Tour Championhip in Mauritius last December.

He said: “It’s lovely to start the new season in Europe as I finished the last one. It’s been an unbelievable week on a course I love. Perfect, really!”

Woosnam added: “I didn’t manage to read the wind very well on any of the three days. I did appreciate the support of the Welsh galleries and the tournament is good for Wales. Hopefully I will be back again to try to win for everyone supporting me.”