Westwood opens up on Hazeltine and reveals captaincy ambitions 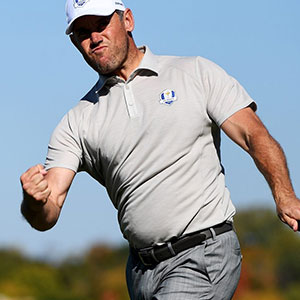 The weeks after the Ryder Cup are always fascinating as the first nuggets begin to emerge as to what the players really made of the week. Lee Westwood could have overtaken Sir Nick Faldo as Europe’s all-time record points scorer with two and a half points from the week but added nothing to his points tally from three matches – Westwood missed a short putt for birdie for a half in the Saturday fourballs and then lost the last three holes in his singles against Ryan Moore.When asked if he had let down his captain (and best mate) Darren Clarke, Westwood said: “Yeah, a little bit. I was a captain’s pick and I would have liked to have performed well for him, but we sat down (afterwards) and chatted about it.

“He said ‘What could I have done differently?’ and I said I thought you did all you could. The American team did to us what we have been doing to them the last 20 years.”

Westwood asked to be left out of the Friday afternoon session to work withPete Cowen and, while his game improved, his putting woes still caught the headlines.

“I rarely lose sleep and people are always going to miss putts. It was a lot of pressure on that situation and just one of those things. I didn’t put a good stroke on it and shoved it a bit and didn’t go in.

“I think sometimes I get judged unfairly on my putting because the rest of my game is so strong. When you break it all down, if I had won the two games that I was involved in that came up the last, we’d have lost by a point.”

As for his future captaincy plans he has 2020 in his mind, with France in two years not an option.

“I certainly wouldn’t want to be the captain next time around. That’s too soon for me, but I think 2020 is definitely on my radar. After that, you know, 2022, who knows. There are a lot of candidates for it but I’ll be putting my name in the ring for sure. It’s something I’d like to do.

“I’ve played on 10 teams and witnessed 10 different forms of captaincy, so I’m pretty well qualified to be a captain I would have thought.”