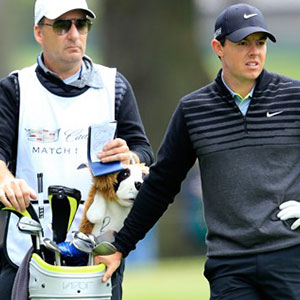 Rory McIlroy relied on his arsenal of Nike Golf equipment to be the last man standing at the WGC-Cadillac Match Play.

The Northern Irishman used his Nike Vapor Pro driver to get the distance we’ve come to expect off the tee - regularly playing second alongside fellow big hitter Gary Woodland in the final.

McIlroy loves the combination between his driver and the Nike RZN Black golf ball.

The ball features an innovative Speedlock RZN core which was created with an interlocking core design to help promote better energy transfer between the layers at impact for faster ball speed, longer distance and more stability into the wind.

Also from the Nike Vapor range, McIlroy had a Vapor Speed 3-wood and 5-wood in the bag.

VR Pro Blade Irons and VR Forged Wedges were complimented by the new Nike Engage 60-degree wedge which the world number one has had in play for a couple of months now.

On the body, McIlroy sported the Nike Lunar Control 3, a shoe he helped inspire, as well as apparel from Nike Golf’s Performance Collection.

His first title came at the Omega Dubai Desert Classic on the European Tour in February.