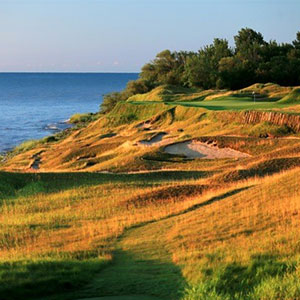 It wasn’t so long ago that the PGA Championship was seen as the poor relation among the four Majors.

A championship that began life as a matchplay event quickly moved from one ordinary venue to another and struggled to produce any repeat champions.

From 1950 to 1970, even after the strokeplay format was introduced, there were 21 different winners.

As have the courses. Now we have Baltusrol, Medinah and Oak Hill on the rota and this year we are back at Whistling Straits on the shores of Lake Michigan in Wisconsin.

In 2004 it entered the Major arena for the first time. It had only been built in 1998, and disappointed no-one.

It is more akin to a rugged Irish links with fairways bordered by wispy fescue and shades of another part of Britain in the form of the 29 Scottish blackface sheep that spend the day on the course. Then there are the bunkers.

“It’s not officially a world record but I can’t think of anywhere else with any more.”

Only 100 will be raked before each day of the championship and, most likely, only half will come into play. Some are in front of the 17th tee while the most recent addition sits in the middle of the 6th green.

“The green on the 6th has seen a large pot punker added into the middle of it so there are two distinct parts to the green.

“At the 18th an additional fairway was added a couple of years ago so it is a real risk-and-reward hole.

“If you can carry it 290 yards it will run down a hill to leave a short iron whereas the safer option is a three wood up the right-hand side but that will leave a much longer approach.”

At the start of the 2004 PGA Darren Clarke described it as “the toughest and fairest course” he had played, including Carnoustie in 1999.

On the Thursday the Northern Irishman was round in 65, which included nine birdies and was not bettered.

“The wind can make the course one of the toughest in the world (it was ranked 8th on America’s Toughest Courses) but, if it doesn’t, players of that calibre can certainly make some birdies.”

According to O’Reilly, the best chance of prospering here is to start the back nine quickly.

And if you were wondering how you and I might get on at Whistling Straits then consider this.

“A 10-handicapper off the back tees would struggle to break 100, there are carries around the 250-yard range so most people will struggle to reach the fairway.”