The modernisation of golf’s rules makes the game better

Good news – the rules of golf are changing. You only had to be watching last weekend’s Six Nations rugby match between England and Italy to appreciate how complicated rules can confuse both the participants and the viewing public. In this case, full-time professionals playing at international level.

Anything that makes the rules of a sport simpler is therefore to be applauded, and that’s precisely what golf’s ruling bodies, the R&A and USGA, have done.

Just the fact that they have managed to reduce and condense the existing 34 rules of golf into 24 is symbolic.

Rules should be there only when they are needed and in an ideal world would be understood without the need to attend conferences and take exams, which is largely the case at the moment.

That isn’t to say that as players we should not take the time to familiarise ourselves with the rules of golf – of course we should. But the rules should not be there to catch us out.

Anyone with half a brain who takes the trouble to consult the rule book should be able to decipher what the answer is to their query.

Accordingly, it’s just as significant that the language and tone of the rules has changed as much as their content.

“The biggest frustration I had was two-fold: one where people were so intimidated by them that they couldn’t even open the book and try to understand them,” said David Rickman, the R&A’s director of rules.

“When people did open the rulebook and perhaps by great skill and endeavor find the right place to look, they still managed to be confused or get it wrong.”

Since the first written rules of golf, 13 of them to be precise, were created in 1744 there has been a feeling that the rules existed to catch out the unwary golfer, or one seeking to take advantage.

The flavour of the proposed changes often gives the golfer the benefit of the doubt.

For example, who has ever gained an advantage by touching the line of their putt? Until now, it attracted a penalty if, for example, you were showing your foursomes partner where you think they should aim.

If the ball moves fractionally at address, it’s not penalised unless it is “almost certain” the player caused it.

You no longer need to alert your playing partners if you are moving your ball to identify it.

The use of DMDs – lasers and GPS technology to you and me – is now assumed to be permitted unless stated otherwise. The reverse used to be true.

“Writing the rules for the honest player has been very much part of this work,” said Rickman.

There is a welcome attempt to simplify the rules of golf surrounding water hazards, which cause massive confusion on a daily basis.

While giving committees the option of retaining their yellow stakes, the suggestion is that only red are really required – apart from in a few exceptional circumstances.

And when dropping a ball you will no longer be required to do so from shoulder height. A welcome removal of unnecessary ceremony.

A couple of eye-catching modifications relate to pace of play, which is also welcome.

Ball searches will be limited to three minutes instead of the current five; and it will not be necessary to remove the flagstick before putting.

(As an aside, I wonder if there is a scenario where this will be abused by those putting downhill from short range and figuring that the flagstick might help slow the ball down? Hopefully not.) 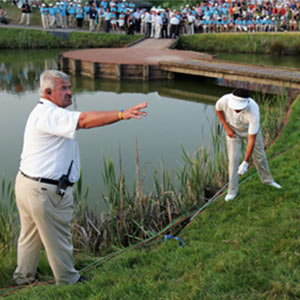 Some of the changes just seem to make the game more fair. For example, you can now tap down spike marks on the line of your putt. And you are not penalised for grounding your club in a hazard – though you should still not disturb the sand behind your ball in a bunker.

Finally, and also greatly welcome, is a cessation of the practice of caddies lining up their player.

A curious aside is that this has become common practice in the ladies’ professional game but is rarely seen as a tactic in men’s golf.

Anyway, the authorities have rightly concluded that alignment is a golfing skill and therefore down to the player.

In the interests of balancing the argument, it is fair to say that it will now be easier to cheat, with the burden of proof on the side of the player.

I would say that if someone wants to cheat at golf they have always had the opportunity do so dozens of times in every round. Nothing has changed in that respect.

The game depends on the integrity of the player and with that responsibility comes power.

It should be made clear that these are just proposed changes for the time being. We have now begun a six-month consultation period before the new rule book is released next year and the new rules of golf come into effect in January 2019.

The only shame is that it we have to wait almost two years.