He's hardly a household name but we can learn a lot about Alexander Bjork from the gear he uses.

Alexander Bjork WITB. The Swedish player grabbed his maiden European Tour victory after an impressive final round 65 in China.

The 27-year-old is far from a household name and, other than Henrik Stenson and Alex Noren, it has been ‘Oh So Quiet’ for Swedish golfers in recent years. (Too laboured? Thought so.)

But we can learn a bit more about Bjork through the equipment he uses.

Cobra is one of the biggest selling brands in Sweden thanks to players such as Jesper Parnevik, Jonas Blixt and Johan Edfors using their gear.

The colourful nature of the brand also seems to resonate with the Scandinavian golfing market.

So, it comes as little surprise to see Bjork gaming a number of Cobra clubs including the same irons as Rickie Fowler.

Bjork is also a Galvin Green ambassador when it comes to his clothing. The premium Swedish brand are very selective with their players and Bjork obviously fits the bill.

Like Rickie, Bjork uses a mix of the King Forged CB and MB irons.

The mixed nature of Bjork’s bag continues with Vokey SM7 wedges and an Odyssey putter.

We’ve had to look closely at the putter as it’s a classic Rossie headshape but features Odyssey’s new O-Works microhinge face technology.

It’s also in red like many of the new O-Works models.

This is very much a tour special which you won’t be able to find in the shops. 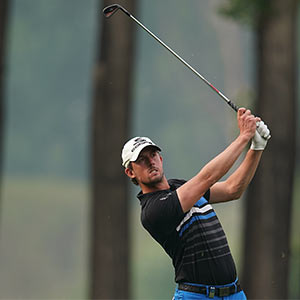