Check out the Titleist clubs which Justin Thomas used to land his first major at Quail Hollow.

Justin Thomas relied on a bag full of Titleist equipment as he came from two shots behind to claim his maiden major title at Quail Hollow.

The 24-year-old – who shot a 59 on his way to three PGA Tour wins earlier this season – made crucial birdies at the 10th, 13th and 17th to reel in overnight leader Kevin Kisner.

And it marked a first major title for the new Titleist 718 MB irons which Thomas used from 5-9-iron. He also carries 716 T-MB and CB models.

Apparently around 70 percent of tour players have a mixed set of irons in their bag these days.

Jordan Spieth used a 718 T-MB 3-iron on his way to victory at The Open last month. 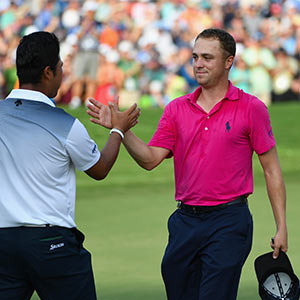 We’ve been testing out all the new 718 irons on a recent trip to Archerfield and can bring you all the details on August 24.

Another fairly recent gear change for Thomas was a switch to the Scotty Camerom Futura X5 prototype.

His request for a for a smaller mallet with easy alignment, promoting an arced stroke actually resulted in the Futura 5.5M model being released to the public.

Thomas was early to adopt the 917 woods, including the D3 driver, but still carries a 915 5-wood.

He has a mix of Vokey SM5 and SM6 wedges in the bag and favours the Titleist Pro V1x ball – the same model which Spieth used at Royal Birkdale.