Former Callaway staffer Patrick Reed has one of the most mixed bags on tour, but it has just helped him to a Green Jacket.

Patrick Reed WITB. It is unlikely we have ever seen a Masters champion with a mixed bag on this level.

You never quite know what gear Reed is going to pull out next.

And most of his gear is at least five years old… No comment.

The former Callaway staffer has been mixing it up to say the least in recent months with a bag of equipment you’d be far more likely to see on the first tee at your home club than at Augusta National.

But Patrick Reed is not your average tour pro. He gets a bad rap and is hardly the most popular guy on tour.

But I’ve spoken to him once and he seemed warm and friendly.

As a free agent, Reed can use whatever he wants so it’s always interesting to see what those who don’t have contracts use.

Reed opts for the Ping G400 LST driver which is one of four models within the G400 range.

Then he goes old skool for his 3-wood with the Nike VR Pro which was made long before Reed proclaimed to be one of the top five players in the world.

The American has three different iron models on the go with a Titleist T-MB driving iron, a Callaway X Forged 4-iron and then some Callaway MB blades which are as old as his 3-wood.

Not many people have heard of Artisan wedges, but they are made by former Nike clubmakers who have started out a new business.

He also has a four-year-old Titleist Vokey SM5 lob wedge thrown in for good measure.

The putter is a little more familiar in the shape of an Odyssey White Hot Pro 3 – an Anser-style blade. 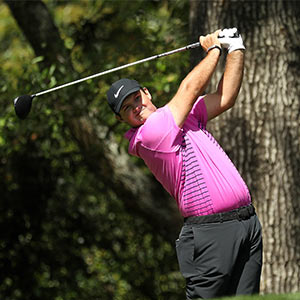