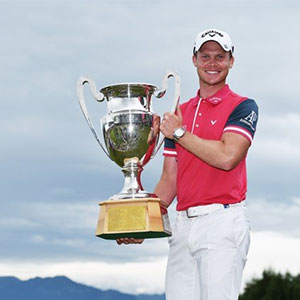 Danny Willett moved into second place in the Race to Dubai after his second win of the season at the Omega European Masters.

The Sheffield player, who impressed at St Andrews last week, went bogey free with a five-under 65 to edge past fellow steel city resident Matt Fitzpatrick by one shot.

Tyrrell Hatton made it an English hat-trick with a closing 62 to finish a further shot back.

Willett’s second-round 62 did the bulk of the damage and he had three straight birdies midway through his final round.

"Matt played some great golf and really kept the pressure on me,” Willett said.

“But it probably made it a bit easier to be honest, because it meant I could not lose concentration even for a minute.

“I knew I had to keep attacking and committing fully to shots.

“Two wins and good performances in Majors and Golf Championships is more than I could have hoped for really.”