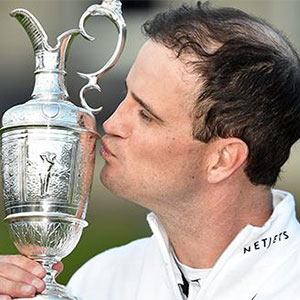 A thrilling three-way play-off saw Zach Johnson crowned champion at St Andrews to lift the Claret Jug and re-establish himself as one of golf’s great players.

Johnson added to the Masters title he won eight years ago after coming through a tense play-off against Louis Oosthuizen and Marc Leishman at the 144th Open.

The 39-year-old American had set the clubhouse target on 15 under after a closing 66 that was matched 40 minutes later by a resilient Leishman, whose total of 130 for the third and fourth rounds gave him a flawless 64 on Sunday – equalling the lowest 36-hole total in major history.

Oosthuizen, who won the 2010 Open at St Andrews, still had two holes left to play and after a wonderful par save on the 17th, birdied the 18th from five feet, making him a favourite among spectators and bookies.

In the end it was left down to an exciting play-off to determine who would be lifting the Claret Jug. The three-way aggregate play-off was played on the first, second, 17th and 18th holes – the first time the Open had headed to extra holes since Stewart Cink defeated Tom Watson at Turnberry in 2009.

Johnson and Oosthuizen made their opening birdies before Leishman three-putted from long range and Johnson edged in front with another birdie on the second.

The 17th proved stern opposition for all three golfers as they each recorded bogeys, and after Johnson missed his birdie attempt on the 18th, Oosthuizen's shot from 12 feet also missed to give Johnson his second major title following on from his 2007 Masters Triumph.

"I feel blessed to be the champion, I feel honoured to part of the history of this game and to don my name on that trophy, especially with the names before me,” said an emotional Johnson after the game.

"Humbling and surreal are two words that come to mind.

"I can't play any better than what I did. I had a lull on Friday and Saturday, but nothing significant, but stayed in it and waited for the opportunities and made a few."

Jordan Spieth had his hopes for an unprecedented golfing Grand Slam scuppered after missing out on the play-offs by one shot.

The 21-year-old American was seeking to become the first man to land the year’s first three majors since compatriot Ben Hogan in 1953.

All he needed was a birdie on the 18th hole to join the play-off party, but his approach shot spun back at him and into the Valley of Sin before he narrowly missed his following birdie attempt.

It turned out to be a good day for English duo Danny Willett and Justin Rose, who were three shots further back in a share of sixth place with Sergio Garcia and 21-year-old American Jordan Niebrugge, who finished as the leading amateur.

Irish amateur Paul Dunne, who held a share of the lead at the end of the third round, struggled to a 78 on Monday and finished in a tie for 30th position.

Here’s the equipment and clothing Zach Johnson used to achieve victory at the 144th Open Championship at St. Andrews: