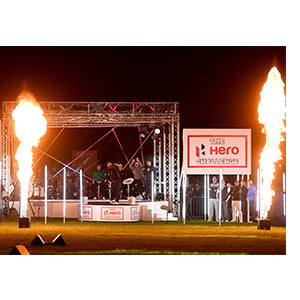 The new six-hole format will "innovate" and "revolutionise" the game, according to the European Tour.

The European Tour has revealed a brand new six-hole team event which they believe will modernise the sport and attract new fans to the game.

GolfSixes will consist of two-man teams from 16 different countries with the tournament taking place at St Albans’ Centurion Club on May 6-7.

Each country will be represented by the highest ranked player with a compatriot of their choice joining them.

GolfSixes, aimed to replicate cricket’s exciting – and incredibly successful – Twenty20, will be played in the greensomes format with an initial group stage followed by a knockout competition to determine the winners.

In addition to the shortened format the Tour will introduce new amphitheatre-style stands around the tees and greens with music and pyrotechnics.

All players will have microphones and encouraged to engage with fans where possible, including live streaming on social media.

New cameras will also be introduced to give viewers and inside look with POV cameras, caddie cams and on-course player interviews.

Keith Pelley, Chief Executive of the European Tour, said: “We want to broaden the appeal of our sport to the millennial demographic and I think this format will do that, not only through the quick and exiting style of play, but also with the interactive digital experience fans will enjoy on site and the innovative television coverage people will enjoy at home.

Both players in each team hit tee shots on each hole. The best tee shot is selected and then the team alternate play of all subsequent shots required to complete the hole.

Matches will be played over all six holes with one point awarded for each hole won. The winner of each match will be the player with most points at the end of six holes

In the case of a tie or ties in the group table after all matches have been played, each team’s total points differential from the 3 matches (similar to goal difference) will be used to determine the qualifiers to the knockout stages

If this does not resolve the tie, then this will be decided by a hole-by-hole play-off on a shortened play-off hole on hole 18.

Matches will be played over as many holes as is required to determine a winner.