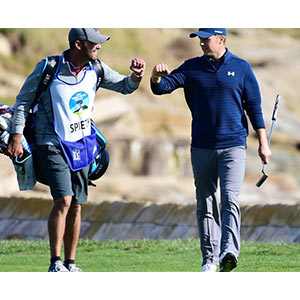 It’s been coming. Three top ten finishes in his last three starts and now a comfortable win in California. It’s safe to say that Jordan Spieth could be in for another lucrative year on the PGA Tour.

A stress- and bogey-free last round from the young Texan saw him pick up his ninth win on Tour at the tender age of 23, becoming the second youngest in history to win nine times.

A final round of 70 was good enough for a four-shot victory over Kelly Kraft, who despite his best efforts, couldn’t get close enough to every really challenge Spieth’s lead at the top of the leaderboard. An early birdie at the 2nd gave Spieth the perfect start as others around him looked for some momentum. Strong iron play saved his occasional poor tee shots and a long birdie putt on the 17th after a run of fourteen pars was the icing on top of a very tasty cake for the two time major winner.

There were sub-70 rounds for Jason Day and Dustin Johnson to cement top-five finishes. But the week belonged to Spieth and with just over 50 days until Augusta, you wouldn’t want to bet against him picking up another green jacket.

“I could afford to make a couple of mistakes today if I needed to but fortunately I didn’t and managed to stay ahead,” Spieth said after picking up his second trophy in four months having won the Australian Open in November.

“It was just kind of a dream round when you are leading by a bunch. I kept saying, ‘I don’t like playing boring golf’, but that’s what was needed today and that’s how we closed it out.”