It was a day that promised so much for Rory McIlroy. It ended with the same sick-in-the-pit-of-his-stomach feeling he knows so well at Augusta.

Rory McIlroy almost has it all. But the thing he wants the most continues to elude him.

Worse still, the Augusta National layout that has and will always stand between him and that Green Jacket that would complete him just keeps teasing.

This was what the Northern Irishman had to say on the eve of yesterday’s final round, some seven years on from his infamous meltdown.

“I’ve been waiting for this chance, to be honest. I always have said that 2011 was a huge turning point in my career,” he said. “It was the day that I realised I wasn’t ready to win major championships. I needed to reflect on that and realize what I needed to do differently.

“But now I am ready. I learned a lot from it. I’m happy to be in the final group.

“Obviously I’m not in the lead like I was going into that day, so I probably don’t have as much pressure. I don’t have to protect anything, so I can go out and sort of free-wheel like I did today, which is a great position to be in.

“I wish I was a little closer to the lead or leading. But I’m in the final group and I’ve shot 65 on moving day at the Masters. It’s all I can ask for.”

Over the first three rounds, there had been just four bogeys in 54 holes – one in every 14 holes, give or take.

On Sunday, there were five in the first 14 holes.

On Saturday there had been control and precision. His very first shot on Sunday was lucky not to go out of bounds. It was wider than all of his bad shots put together from the previous day.

It was a harbinger. Of his first five drivers of the day, four found trouble right. From the best driver of the ball in the world of golf, at something close to the top of his game, that is unfathomably bad.

The old golfing maxim says that many great rounds begin with a bogey; here a dreadful one began with an unlikely par save.

A wonderful long iron into the 2nd looked to have set up an eagle. From four feet he missed. How different might it have been had that gone in – Patrick Reed’s overnight three-shot lead would have evaporated in two holes.

McIlroy’s putting though is brittle at times like these. He never looked like saving par at the 3rd and while a classy birdie two quickly followed, there was nothing doing as putts slipped by – and didn’t really threaten – at the 8th and 9th. 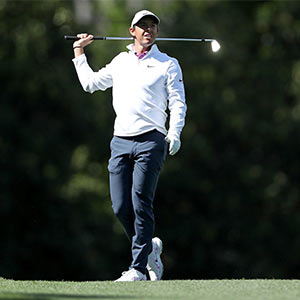 For all his mercurial qualities, the 28-year-old is not a patient man and he is cursed with being too smart not to realise when a major is slipping away from him.

Suddenly, as Spieth posted birdie after birdie, he was four and then five and then six adrift – a bystander as Reed gritted his ursine way through the closing stretch.

That is so far from where McIlroy wants to be. Yet here he was again, in the final group, a bit-part actor in the Augusta drama.

If there was any consolation, and it can be filed under ‘scant’, at least this time, unlike seven years ago, he had never actually held a final-round lead.

Lest we forget, McIlroy followed up his 2011 Masters collapse by winning the very next major, the US Open, by eight.

By comparison, this was more of a no-show than a collapse. But back then McIlroy could put it down to inexperience.

How will he rationalise this? What would his 21-year-old self-have said had he known his wardrobe would still be lacking a certain something seven years later?

Much of McIlroy’s play was very good last week and for three days he displayed admirable maturity. And yet.

All his comments about patience and calmness and staying in the moment just felt a little like somebody trying to convince themselves rather than statements of facts.

In truth, he is still afflicted by a certain skittishness that only seems to appear in the vicinity of Augusta.

If you were missing one major to be lacking to complete the career grand slam, this is surely the last one you would choose.

The others change every year to a greater or lesser extent. You don’t really get on with St Andrews? Next year the Open will be at Troon or Lytham. You got beaten up by Oakmont? It will be a decade at least before the US Open returns.

At Augusta, there are very few variables. And so next year, McIlroy will have to do it all again. And then again, the one after that. It’s the same set of problems, the same colours, the same smells.

He has many Masters ahead of him. But will he ever find fulfilment in Georgia?