Mick Doran is one of the most recognisable faces on the European Tour. Mark Townsend spoke to the caddie who has 34 wins to his name.

Mick Doran’s caddying CV reads like a list of Who’s Who of the game. He first picked up a bag at the age of 12 and, 36 years later, he has been at the side of, to name just a few, Lee Westwood, Justin Rose, Luke Donald, Darren Clarke, Costantino Rocca, David Howell, Darren Clarke, Paul Lawrie, Thomas Bjorn, Camilo Villegas, Trevor Immelman, Francesco Molinari, Victor Dubuisson and Rory Sabbatini.

These days, after nine years in the States, he can be found on Eddie Pepperell’s bag.

If you follow the European or PGA Tours you’d recognise Doran in a flash, whether it was from his 34 wins or seven Ryder Cups.


When did you start working on the European Tour?

I started in 1988, seven of us were working at Wentworth and a couple of us then went on tour and the rest followed.

The European Tour back then was in Europe, so it was easier to get around. For the shorter trips you would hire a car for the week or you could get a train pass that would last you for two months and it cost very little. There was no money to be made, it was more about having a good time.

Over the years more money went into the pot and then Tiger Woods came along, and it is what it is now. I remember the first Dubai Desert Classic in 1989, the money’s hardly changed there at all. It’s still a good tournament but I’m comparing everything to America where it is ridiculous, and you can see why so many European players go over there.


Is the treatment of caddies much better in the States compared to Europe?

It’s only in the last four years that have things improved in the States. You’re not allowed in the clubhouse or locker rooms, but you don’t really want to go in them, it’s good to get away from the players so they can sort their stuff out and have some space. Every week now you get food and car parking spaces.

Over here the Caddies Association is doing some really good things and it is so much better than years ago. We used to take a tent around, now there is a website with deals for hotels.


Your current employer Eddie Pepperell speaks up for caddies on a regular basis. What’s he like?

Eddie’s a really good lad and not many players would stand up for the caddies like he does and, particularly for such a young lad, he gets a lot of respect from the caddies. It’s not hard is it but he does it.

Eddie says what he thinks, is very highly thought of and it hasn’t got him in trouble yet, so he must be doing alright. Everyone loves him on Twitter, he’s very honest.


Last year a lot was made of certain caddies having vetoes in places to overrule their player. Do you operate a similar system?

No, that’s all part of the job isn’t it? If I’m not happy with what a player’s doing, then I let him know though I’m not going to push it on them. Sometimes it’s better to let them hit the wrong club but execute it better than hit the right club and execute it poorly.

I like to say what I think and that might get you in trouble but that’s all part of it. It’s all common sense.

Look at Rory McIlroy in Dubai recently; he carved it right at the 16th and he has got no shot whatsoever, the pin is back left, and he has got a tree in front of him. He’s in the sand and he’s got a lump of sand behind the ball, so he can’t cut it so he’s only going to be able to hit it straight left which he did.

A strong caddie would just say just chip out and rely on your short game. He made a good bogey in the end, but he could have made a par.


What would be the process of working for him if or when his bag came up?

He’ll come looking for you. Knowing him he wouldn’t ask someone who already had a job, he’s not that kind of guy. People have put in for it, but he won’t take anyone who already has a player.


What’s the strangest parting of the ways you’ve been involved in?

When they start playing badly you know your job is on the line. I won 16 times in two-and-a-bit years with Westwood and he then went through a bad patch. It was nothing to do with me but that was it, he wanted a change of face.

He wanted to draw the ball. He used to hit the ball left to right and he hardly missed a fairway, but he tried to change things.

The two PGAs at Wentworth. I won there with Rocca in 1996 and then with David Howell 10 years later so they were good fun.

I have always loved the course. What they did to it was embarrassing on that beautiful piece of land, it should be like a listed building. They’ve done a fantastic job now of revamping it.

That would be my biggest memory of anything. He drove it down the left which you do. We decided on the lob wedge – he probably should have hit a 7-iron along the ground – and the divot went further than the ball.

I just felt so sorry for him. He wasn’t the best putter, he should have won so many more tournaments, he had so many 2nd places and top 20s, but he really struggled with his putting.

I thought he would three-putt it so I tended the flag and it started tracking to the hole, there isn’t much break on those greens. About 10 feet out I thought it’s got a chance and then it went in. I couldn’t believe it.

And then you are straight into a play-off and all the emotions are flying around, he had no chance really. 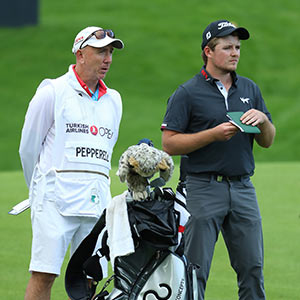 Is that the loudest cheer you’ve heard?

It was only surpassed by Francesco Molinari when he had a hole-in-one on the Saturday at Phoenix, that was mind-boggling.


If it was tipping it down at the Open and blowing a hooley, whose bag would you want to be on?

Someone with a good attitude. I’m not just saying it because I work for him, but Eddie has a fantastic attitude.

Darren Clarke wouldn’t worry about the umbrella or getting wet, his mind-set would just be into the golf and he has the game for that sort of weather. In form I would go with Darren.


Were you working at the 2002 Open at Muirfield when Tiger’s Grand Slam got washed away on the Saturday?

I was with Justin Rose, he shot three under and we saw this big black cloud coming over.

I went back to my accommodation, put the golf on, had a nice cup of tea, got out the biscuits and put the golf on. For the next few hours Justin just went up and up the leaderboard and everyone got soaked.

When you are going around these courses and you see these small bunkers you think why they are there and then you watch that, and you realise.


Which caddie would you have if you were a player?

Billy Foster. I’d have a good laugh with him.


What do you make of so many players having their mates on the bag these days?

Anyone can do it now as the yardage books are so good these days. In the States they’re bringing in more of their friends, who haven’t made it from college, and they would rather give the money to them. In the next 10 years we’ll see more and more of this happening in Europe.


Can you paint a picture of what caddying was like in the early days?

If you had the yardage book of years ago you would have to do so much homework. Now you have a grid on the green, so you know exactly where the pin is and what is around it, you can play a course blind with the books these days.

If a player had the old yardage books of 20 years ago and he had a friend on the bag, then the caddie wouldn’t have a clue.

The shape of the greens wasn’t right, it would just be a big circle. At St Andrews on the 1st you would have to measure from one window on the left-hand side to the water, there was nothing on the ground. It was so hard, and you had to triple-check yourself all the time.

For the yardages you would just have a wheel. Billy and I did Sun City with the wheel one year and there would be a drop on a par 3 and we would have a piece of string to measure the drop.

It was a lot of work to put the yardage book together, now you just pay £30 and it’s the best money you’ll ever spend.


What do you make of the green-reading books?

They’re a waste of money in my opinion. As a player you are where you are because you’re good at what you do. Now you have a six-foot putt and you think left edge, but the book says outside left so now you’ve got doubts.


Do you remember the first rangefinders coming out?

You wonder how much better they can get, they’re unbelievable. On practice days they are so good at helping with run-outs or bunkers.

Even when I’m doing the greens I would laser someone to measure from back to front. I use the ProX2, it’s so small and easy to use.

They talk about using them in tournaments, I would only use them if you are in trouble and you can’t get a yardage.


What’s your favourite course? And you can’t say Augusta…

Hilton Head, I really like old-school tree-lined courses where strategy is key and it’s not all about smashing a driver. They hardly do that anymore these days.