Rahm bags another early win for the TaylorMade M4 driver and moves up to second in the world rankings.

Jon Rahm kicked off 2018 in style and bagged another early win for the new TaylorMade M4 driver.

We saw Dustin Johnson dominate with the M4 at the Tournament of Champions in Hawaii and now Rahm has continued the momentum for the driver which features Twist Face technology.

Tommy Fleetwood also claimed a win for TaylorMade with the new M3 driver at the Abu Dhabi HSBC championship.

And with Sergio Garcia winning with the new Callaway Rogue Sub Zero driver in Singapore, club golfers around the world will be reaching for their wallets.

The rest of his bag is pretty much the same gear which propelled him up the world rankings in 2017. This latest win, which came after a play-off with Andrew

Landry, has fired him up to second in the world.

We told you last year that the TaylorMade P790 irons were good and that has been backed up by Rahm, Johnson, Rory McIlroy and Justin Rose all putting a long iron in the bag.

Rahm then goes into the P750 irons which are slightly more compact than the P770.

Nearly all of TaylorMade’s big staff players have put the new Hi-Toe 60˚ wedge into play in recent weeks so we will be keen to get our hands on one and see what the fuss is about.

The Spider Tour Red putter has been a weapon for Rahm over is phenomenal 18 months and he favours the TP5x ball. 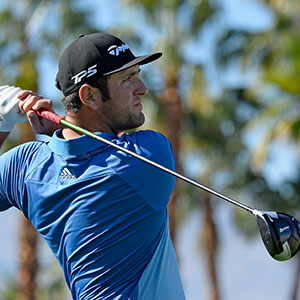