Check out the clubs Rory McIlroy used to land his first win since signing with TaylorMade in May 2017...

The Northern Irishman was quick to put the new TaylorMade M3 driver in the bag at the Abu Dhabi Championship at the start of 2018.

It was an interesting switch from the non-adjustable M2 to the M3 where he moves one weight as far forward as possible and the other in the middle but a bit further back.

When he went to the Tensei Orange it clicked in terms of barely any drift in the left to right wind he was testing in – it was giving him a 2/3 yard draw.

Unsurprisingly after a putting horror show at the Farmer’s Insurance Open, McIlroy put a new flat stick in the bag for the Genesis Open.

But then he switched again at Bay Hill to a TaylorMade TP Black Copper Soto with red insert and a slant neck.

As reported recently, he’s one of many TaylorMade staff players to put the new Milled Grind Hi Toe wedge in the bag.

Like most tour players these days McIlroy splits his iron set with TaylorMade P750 and P730 models in the bag.

And he uses the TaylorMade TP5x ball. 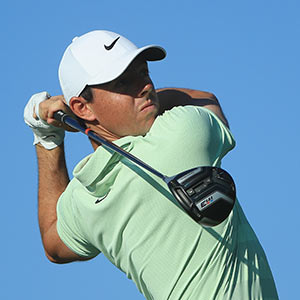