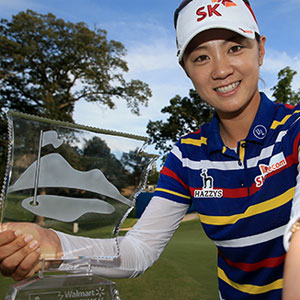 Na Yeon Choi fired herself to victory at the Arkansas Championship, after a 16th hole eagle pushed her ahead of the field and into in a lead that she would not relinquish at the Pinnacle Country Club.

With Stacy Lewis holding a one lead, the American missed a short birdie putt allowing Choi to take a one-shot lead and eventually the title.

“I mean, today, especially my putting didn't really work and but still I tried to keep focus my shot and swing, and then I kept hitting well and then after 16 I, after I hit the second shot, I knew this is going to be good,” Choi said. “I felt really good, you know, feeling after the impact. So when I holed the finish, I thought it's going to be good, but I didn't expect like go in. I was very happy after that shot, but like unfortunately I couldn't see the ball going in. I just heard a lot of screaming around the green.”

"Those two shots, I think I have to remember for my future," said Choi, who earned herself $300,000 with this win.

Meanwhile Lewis has now gone 27 tournaments without a victory, the longest of her career since a 25-tournament stretch between her first and second career wins during 2011-2012.

"It's tough, but honestly it's been a few weeks since I've been in this position and a few months, really, so you can't be too upset," said Lewis. "When somebody holes out and makes birdie on 16 and 17, you know, it's one of those things that it's kind of meant to be for [Choi]."

Choi now has nine wins on the LPGA Tour with this win.