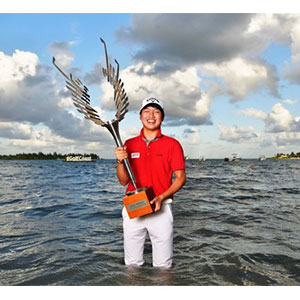 There was a moment of history on the European Tour this weekend when Korean sensation Jeunghun Wang became the youngest player is the Tour’s history to win consecutive events.

Wang came from behind to claim the AfrAsia Bank Mauritius Open a week after his maiden win in Morocco.

Wang didn’t start his final round the way he wanted though, with a bogey on the opening hole. He followed that with another at the par-4 6th hole and looked in danger of falling away from the lead after nearest rival Siddikur Rahman made back-to-back birdies at the 5th and 6th holes.

Rahman was in control and approached the 16th tee with a three shot lead over Wang. That was all to change though when Rahman double-bogey the 16th and dropped another shot at the par-3 17th.

The players headed up the final hole with the scores level and with both finding the right side of the green with their second shots it was a question of who could hold their nerve and make the crucial birdie to win.

It was Wang who managed to get up and down to finish on 6-under-par and win his second consecutive event.

What Wang said: “I can’t believe that I’ve won two weeks in a row. I’m so excited right now and really happy that I have won. I hope I can win three in a row, but next week is a really big tournament and it’s my first time in Ireland, so I’m not sure, I’ll be trying my best.”