Montgomerie loses out to Maggert at US Senior Open 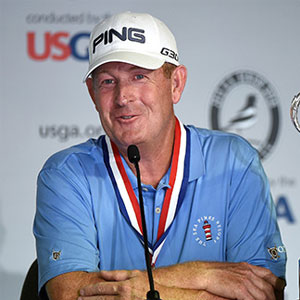 Jeff Maggert took his second senior Major victory at the expense of Colin Montgomerie, eventually edging the defending champion by two shots at the US Senior Open.

After only three victories in 20 years on the PGA Tour, Maggert has now matched his total in just under a year as a senior competitor.

"It's satisfying just because the guys out here on the Champions Tour are the same guys that I was trying to beat 20 years ago," Maggert said.

"I had a lot of good runs in the U.S. Open over the years and probably lacked a little maturity to pull it off. But certainly, now that I'm an old guy, I've learned a lot and was able to just steady myself and play well."

Mongomerie's final round 66 was not quite enough to retain his title and become the first back-to-back winner at the US Senior Open since Allen Doyle in 2005/2006.

"To come here tired, very tired, and to put a good performance up, it's always nice when you are defending a title, to defend it properly," said Montgomerie, who tied for 64th at Chambers Bay last week. "I did more than that. I nearly got it here."

The 52-year old is still without a place at The Open, and has a whirlwind schedule ahead in his mission to get to St. Andrews.

"I'm off now to L.A. airport to fly directly back to London to try and qualify for The Open Championship Tuesday morning," Montgomerie said. "I get in Monday night. 36 holes in the day. I'll be tired then, I can assure you. But all credit to Jeff Maggert for his performance today."