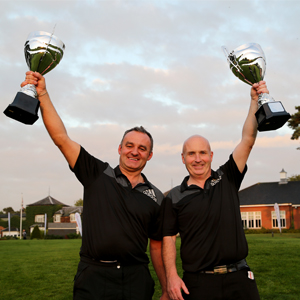 American Golf is delighted to announce that after months of qualifying events all over the U.K. and Ireland and 4 absorbing rounds of 9 Hole golf at Ryder Cup venue the Belfry, its 9 Hole Champions for 2016 are Irish duo Kevin Commins and Thomas Muldoon. The pair from Ardee in Co. Louth qualified for the finals for the second year running and after falling at the semi-final stage in 2015 were determined to get the job done this time round.

“After last year it felt like we had unfinished business,” commented Muldoon, a publican from Ardee. “We came over to the Belfry a month ago to play the Brabazon and make sure that we were as prepared for the finals as we could be. There was some great golf played in difficult conditions and I really think that the preparation we put in was the deciding factor in us coming out on top.”

A fantastic score of 24 saw Commins and Muldoon secure qualification for the semi-finals, a score matched by playing partners, father and son Steve and James Hodgson. Their strong second rounds saw these pairs split in the semis taking on last year’s finalists Mark Kelly and Luke Eustace with the Hodgsons paired with second Irish pair Denis O’Brien and James Keen.

Both semi-finals were keenly contested, going down to the 9th hole to decide the finalists. After some high quality golf the final was held between second round pairing the Hodgsons and Commins and Muldoon. 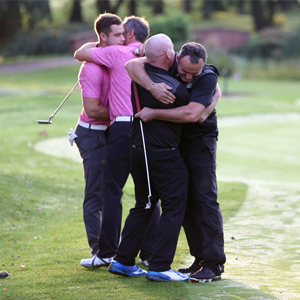 With the final held on the back 9 of the Brabazon, first out of the blocks were James and Steve Hodgson with Steve, playing of 13, stiffing his approach shot on the famous 10th to 2 ft. A conceded birdie saw them go 1 up after 1. A second win on hole 11 saw the Hodgsons go 2 up before a run of 3 holes of impeccable iron play from Commins saw the Irish pair go from 2 down to 1 up. A halved hole followed by another win on 16 saw Commins and Muldoon go 2 up with 2 to play but 17 saw James Hodgson play a 220 yard 2 iron 10 ft before Steve holed out for a net 4 to take the match down the last.

With 4 safe tee shots away on 18, the Hodgson’s were sat in pole position close to the water and the green in sight, Commins had 215 to the pin and took a 5 iron.

“I couldn’t help but think of Christy O’Connor’s famous shot to beat Fred Couples from the same spot in the 1989 Ryder Cup,” commented Commins after the round. “As soon as I hit it I knew it couldn’t have gone better and that we’d have at least 2 puts to win the match.”

And put out they did for a fantastic win, taking the final 1 up. After coming off the final green Steve Hodgson was magnanimous in defeat commenting, “To play in a final like this with my son has been a wonderful experience. Our games came together today and we played some wonderful golf. The whole weekend has been amazing and I can’t thank American Golf enough.”

Commins continued, “We left it out there last year so we were determined to get the job done. American Golf have given us the chance to play competition golf at an amazing venue and they’ve looked after us so well. It cost us more to get our golf clubs here than everything else put together for this weekend. We’ve been treated like Tour Pro’s and would encourage anyone to enter in 2017 to get a chance to experience the same.”